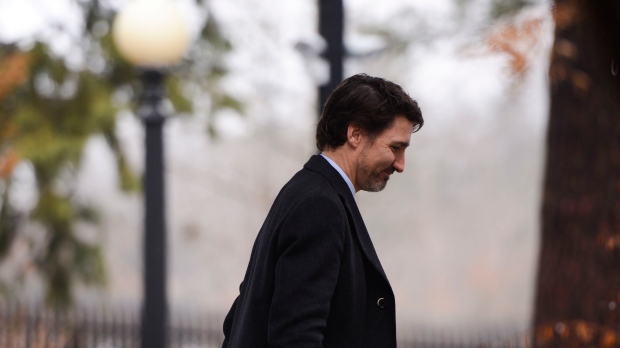 OTTAWA — Prime Minister Justin Trudeau says that the military is “gearing up” to join the federal approach to combating the COVID-19 pandemic, and the federal government is expanding the wage subsidy for Canadian businesses, no matter their size.

“Over the past few weeks the Canadian Armed Forces have been gearing up to support our efforts and our communities, as we fight COVID-19,” Trudeau said.

He said that while the federal government has not yet received a formal request from a province or territory for the military’s intervention, whether sending supplies or to aid with the coming flood or forest fire seasons, they are ready to respond.

As part of the daily ministerial update on the federal plan to combat the novel coronavirus, Defence Minister Harjit Sajjan and Chief of Defence Staff Jonathan Vance offered more details about how the Canadian Armed Forces are planning to handle any calls to assist pandemic response efforts.

Sajjan said the military has three priorities they are ready to enact: efforts to slow the spread; supporting vulnerable communities; and assisting provinces or municipalities with logistics or direct assistance if needed.

These efforts would be in addition to being able to respond to other emergencies, like the widespread flooding seen around this time last year.

The defence minister said there are up to 24,000 regular and reserve forces ready to deploy, and 10 units across the country that could react immediately to any request for assistance whether it be humanitarian, delivering supplies, or other actions.

Sajjan said that, in anticipation of a surge in cases, the military took precautionary measures to make sure their ranks stayed health and remained ready to respond, including ordering members to stay home.

“No matter how challenging the circumstances, when called upon, the Canadian Armed Forces are ready to serve,” he said.

On Monday, Trudeau announced that any Canadian businesses whose revenue has decreased by 30 per cent or more due to the pandemic will be eligible for the 75 per cent wage subsidy promised, regardless of the number of employees they have.

This comes after Friday’s announcement of the major increase to the wage subsidy for small- and medium-sized businesses, aimed at helping them keep employees on staff. Charities and not-for-profit organizations are also able to apply, as well as companies big and small, the prime minister said Monday.

“This is about making sure that people are still getting paid whether they work for a business that employs 10 people or 1,000 people,” Trudeau said, noting that many have had to “get creative” to keep money coming in.

The emergency wage subsidy is being back-dated to March 15, and is an increase to the initial commitment of a 10 per cent subsidy. It comes alongside a special emergency guaranteed business loan of up to $40,000, as well as a deferral of customs duties, HST and GST payments.

The announcement comes with a warning from Trudeau to businesses, not to misuse the program or they’ll face “serious consequences.” He also encouraged companies who can still afford to pay their employees their full salaries, or the 25 per cent not covered by the government, to do so.

“Every dollar of this should go to workers,” Trudeau said.

There will be some form of verification program put in place to monitor the use of this aid in the coming weeks, the prime minister said.

Another major travel restriction is coming into effect at noon on Monday: Any Canadian traveller who shows COVID-19 symptoms will be banned from boarding any domestic flights or trains, in an effort to limit the spread of the virus between provinces and cities.

Trudeau said Monday that these additional inspection procedures are as much an alert for rail workers as they are for passengers to “stay home” and avoid unnecessary travel.

“[It’s] an additional measure, an additional encouragement and expectation that people who have symptoms of a cold or of COVID-19 will not travel, that is extremely important,” said Trudeau.

Stateside, late Sunday U.S. President Donald Trump announced an extension on the national public health distancing guidelines through to April 30, as a new Nanos survey shows that 67 per cent of Canadians expect the health crisis to get worse in the next month here as well.

Asked whether Canada is on the same trajectory as the United States, Trudeau said he didn’t think so, stating that Canada was quicker than the U.S., to get testing underway and encouraging physical distancing.

Canadian officials continue to work to negotiate with other countries to bring stranded Canadians home from international locations with varying degrees of lockdowns.

Was to be budget day

Monday was also set to be the day that Finance Minister Bill Morneau presented the 2020 federal budget, but that is no longer happening, though he will be speaking on Tuesday with “many more details” on the costs of measures taken so far, Trudeau said.

It remains unclear when the federal government will be presenting the kind of information typically included in a federal budget, like new spending on mandate commitments given all non-coronavirus initiatives have been put on the backburner.

Last week the Parliamentary Budget Officer projected that the deficit could balloon to $112.7 billion for this coming fiscal year, in part because of the billions in stimulus and direct aid the government has earmarked, but also on account for reduced economic growth.

Trudeau noted on Monday that while the “costs keep climbing” to the government of this global pandemic, the focus is on making sure Canadians keep their jobs.

There will also be more spending coming, with Morneau recently mentioning the hospitality, airline and energy sectors as industries he’ll have more to say on “in the very near term.”

“In the coming days, what we want to do is give people a more full understanding of how the impacts will be mitigated to the best extent possible in this challenging time,” he said last week.

Trudeau said that the Canadian balance sheet is still in good shape, compared to other G7 nations.

“We have been making sure we have money aside for a rainy day. Well, it’s raining, and we are not able to invest in Canadians… As we make the difficult decisions needed to get through this and come back stronger than ever before,” Trudeau said.

Trudeau’s address from Rideau Cottage marked the beginning of most Canadians’ third week of life upturned by the COVID-19 pandemic.

“I know that it is hard, but we all must stay strong, and stay at home,” was Deputy Prime Minister Chrystia Freeland’s message on Monday.

Chief Public Health Officer Dr. Theresa Tam has said this week’s infection trends will provide key insights into the efficacy of Canada-wide isolation measures so far in flattening the curve.

Between the morning and afternoon the COVID-19 case count shot up by another 1,000, reaching 7,286 confirmed cases in Canada by 1:30 p.m. EDT, with the disease present in every province and territory, with the exception of Nunavut.