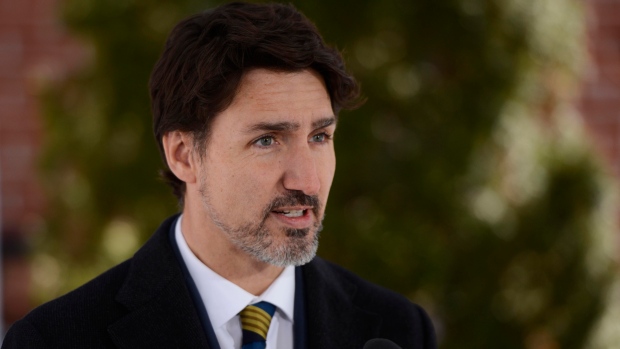 OTTAWA — Prime Minister Justin Trudeau is using his daily COVID-19 address to highlight the now-launched Canada Emergency Business Account program and says his remarks on Saturday will come from the floor of the House of Commons as it convenes to pass additional aid measures.

Parliament has been recalled for a rare emergency Saturday sitting to hold an accelerated debate and vote to see another major economic policy passed into law: the 75 per cent wage subsidy for employees.

Trudeau will be present for that sitting, and will deliver his daily update from his place inside the Chamber. He has also announced he will be taking Sunday and Monday to spend time with his family and will provide his next COVID-19 national address on Tuesday.

The prime minister hinted that the government will have more to say soon for those feeling mentally challenged and overwhelmed by the new reality the pandemic has created across the country.

After days of back and forth the minority Liberals and opposition parties have agreed to reconvene in Ottawa with a limited bracket of MPs to pass the second piece of emergency COVID-19 legislation.

Talks continue as to how to see the House of Commons convene remotely in the future, as the pandemic is set to limit the ability for Canadians to convene for weeks and even months to come.

Trudeau also spoke about the newly-available loan program, and reemphasized the billions in other emergency response benefits the government has enacted or are in the process of launching.

The loan program was first unveiled late last month, as a way for businesses to access government-guaranteed loans to cover the costs of keeping their enterprise afloat during the COVID-19 crisis.

Finance Minister Bill Morneau announced on Thursday that the program was now available and encouraged businesses that are having a hard time covering their rent, utilities or other operating costs to get in touch with their bank about accessing the loan.

“It will only take a few days for you to receive the full amount in your account. That’s money you can use for whatever you need, whether it’s monthly expenses or paying employees,” Trudeau said on Friday.

Last month, the government announced the emergency loan for small businesses, seeing banks offer $40,000 government-guaranteed loans interest-free for the first year. If the company can repay the balance of the loan by the end of 2022, up to $10,000 will be forgiven.

Projected as a $25-billion program, not-for-profit organizations are also able to apply through their banks, to help cover their operating costs during a period where their revenues have been “temporarily reduced” due to the economic impacts of COVID-19.

The prime minister spent Thursday evening on the phone with premiers, where he and Deputy Prime Minister Chrystia Freeland discussed the stockpiling of supplies underway as well as the potential of enacting the sweeping national powers of the Emergencies Act.

The federal government has sent a letter surveying the provinces and territories on their current needs and whether the extraordinary powers — formerly known as the War Measures Act — were needed to compel Canadians to stay inside.

The act has never been used as currently drafted, requires premiers to be consulted, and has been viewed as a last resort and there are no plans to enact it yet. If that step was taken it could see the nation come under a “public welfare emergency” allowing the federal government to regulate travel and the distribution of goods within the country, direct trained people to render essential services, and impose steep fines and jail times for those who breach the emergency orders.

According to a readout of the call, Trudeau “encouraged premiers to share their views on how the act could be used, if required, however he noted that current measures and the great collaboration between governments are helping Canada fight the pandemic.”