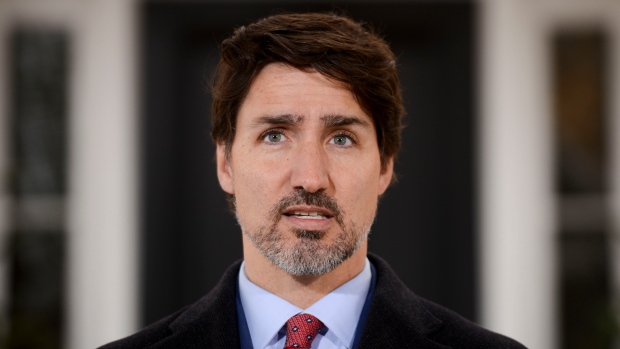 OTTAWA — Facing calls to present a clearer picture on the projections for the COVID-19 pandemic’s spread across the country, Prime Minister Justin Trudeau will address Canadians once again, where he’s expected to have more to say about help for those struggling to keep food on the table as they wait for federal emergency benefits to kick in.

The prime minister, speaking from outside his residence, is expected to speak about next steps in the promised help for vulnerable populations, and is set to spell out additional measures to help Canadians access food from foodbanks and local food organizations.

Trudeau has previously announced targeted economic supports for vulnerable groups including seniors, the homeless population, Indigenous people and women and children fleeing domestic violence. The federal government has also earmarked additional funding for charities to assist seniors and youth, with a promise that more would be coming for Canadians in poverty and other marginalized groups soon.

With Ontario poised to release its COVID-19 modelling Friday afternoon, Canadians in that province will be headed into their weekend with a sense of what the best and worst case outcomes could be, based on the information so far.

Federal officials have not yet ventured further than to say that public health measures like physical distancing could be in place for weeks or months to stave off a surge that would cripple the health-care system, with an estimation early on in the outbreak that between 30 and 70 per cent of Canadians could contract the virus.

According to a summary of the meeting released by the PMO, both the federal and provincial leaders “reaffirmed their commitment to continued collaboration and coordination,” and discussed the ongoing stockpiling of medical supplies and protective gear.

The call also included a discussion about sharing information, and the emergency actions already taken by the various provinces and territories.