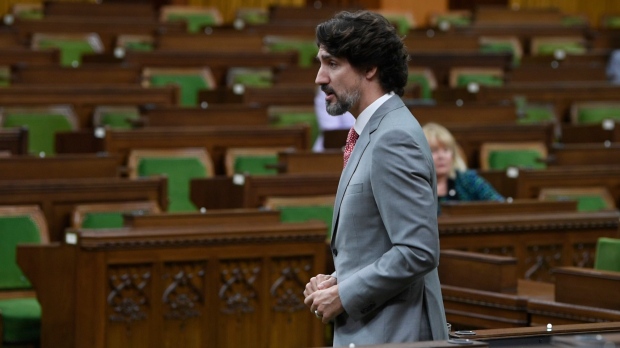 OTTAWA — Prime Minister Justin Trudeau says that as Canada enters the “recovery phase” of the COVID-19 pandemic, the federal government will be moving forward on talks with the provinces and territories on ensuring that every worker in Canada who needs it can access 10 days of paid sick leave a year.

This announcement comes after the NDP made its support for Monday’s motion on how the rest of the spring session will be structured contingent on a more robust commitment to paid sick leave for all Canadians.

“To come out of this crisis, our country needs workers… more than ever,” Trudeau said, citing a Sunday call with NDP Leader Jagmeet Singh about the issue. “Nobody should have to choose between taking a day off work due to illness, or being able to pay their bills.”

Singh was quick to celebrate the win, saying his caucus will “keep pushing the government to make sure they deliver on this commitment and that they work with provinces to make sick leave for workers permanent going forward.”

Trudeau said that “without delay” he will be discussing with premiers a way to ensure that those who need to stay home can without penalty.

He said that British Columbia Premier John Horgan first brought up the issue on a call with all premieres a few weeks ago.

Trudeau said the concern raised “quite rightly” by premier Horgan, was whether come fall flu season, people would be able to stay home without economic impact should they develop COVID-19-like symptoms. The prime minister said he agreed it will be important that anyone who feels ill have the ability to not go into work and rather go get a test to limit the risk of a second wave.

Even though the mechanisms to implement a sick leave program rest with the provinces, Trudeau pointed to other joint federal-provincial COVID-19 relief measures that have been agreed to as examples of how it can be done, such as the commercial rent relief program which launched Monday morning.

The plan offers commercial property owners forgivable loans to cover 50 per cent of three monthly rent payments if they reduce their tenants’ rent by 75 per cent.

Trudeau said that landlords with up to 10 eligible tenants and who are located in Atlantic Canada, British Columbia, Alberta, or Quebec can apply today.

Landlords in Manitoba, Saskatchewan, Ontario, and the Territories, who also have up to 10 eligible tenants, can apply tomorrow, while landlords with more than 10 tenants will be able to apply later this week.

A small number of MPs have begun debate in West Block on the government’s new proposal for how to continue to meet as parliamentarians amid an ongoing pandemic, while keeping in mind the necessary public health precautions.

There will also be a question period Monday afternoon, which Trudeau will take part in.

Defending the current situation, Trudeau said that work has been able to continue amid the pandemic, but that the focus still “needs to be on this crisis that has taken over almost every aspect of Canadians’ lives and of our economy.”

In order to see the motion pass, the government will need the backing of at least one other recognized party. Now that the government has spoken to the NDP’s main sticking point, they are likely to come on side.

“We’re in a pandemic. No Canadian should have to choose between going to work sick or staying at home not knowing if they can pay the bills,” Singh said in drawing his caucus’ line in the sand in advance of Trudeau’s address.

Rather than actually resuming the full House of Commons, the government is suggesting that MPs continue the current meetings of the special all-party committee focused on COVID-19. The committee has been holding two virtual meetings a week, and one in-person meeting.

Now, the Liberal minority is suggesting the committee meet four days a week — Monday through Thursday — in a hybrid fashion that would allow some MPs to participate in-person, while others can take part from their homes, via screens set up inside the Chamber, until June 17. The future special committee meetings would allow MPs to question the government on non-COVID-19 matters, though concerns remain about representation inside the House from MPs from across the country given the propensity of technical and connectivity issues experienced to date.

The proposal would also see MPs attend four additional sittings over the summer and includes a new ability for committees to conduct studies, including allowing the House affairs committee to dive deeper into an evaluation of how a formal hybrid House of Commons session could occur, with the implementation of new tools like remote voting.

Speaking to the motion on Monday, Government House Leader Pablo Rodriguez made the case that the work of Parliament has continued through the pandemic, pointing to the hundreds of witnesses heard from, the dozens of committee meetings held, as well as the handful of emergency bills that have passed.

He also noted that under the current special committee meeting structure, the government has faced more questions from the opposition than it would have under normal House sitting parameters.

Though, this approach continues to not sit well with the Conservatives, who remain opposed to the current House meeting structure and have long been calling for a more robust resumption of sittings with up to 50 MPs, suggesting Parliament be declared an essential service.

Conservative House Leader Candice Bergen accused the Liberals of using the COVID-19 crisis to “shut down” parliamentary accountability. She also noted that many of the usual functions of the House—like advancing private members’ bills and filing order paper questions—have been on pause for more than two months now with no plan in sight to resume those aspects of House businesses.

“The House of Commons needs to be functioning and needs to be seen to be functioning during this crisis. Contrary to what the Liberals, NDP, and the Bloc may think, this house is an essential service to the country, and we its members are essential workers,” outgoing Conservative Leader Andrew Scheer said on Monday, in what may be one of his final speeches in the House of Commons as party leader.

He continues to advocate for a way forward that allows for more accountability on the massive government policies being rolled out over the last two months while respecting the health and safety of all on Parliament Hill, which he called the “beating heart” of the federal government.

Though for his part, Bloc Quebecois Leader Yves-Francois Blanchet is less concerned about the fine print of the motion, and is happy to let the other parties wrestle over the proposal, saying his focus is on how COVID-19 is impacting real people.

“We will probably get on the bus when it comes but we will not negotiate the hour at which it will come, or who will drive the bus,” Blanchet said.