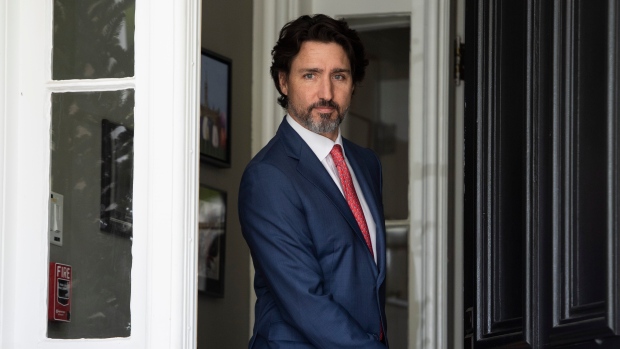 OTTAWA — Responding to the need to increase the capacity to trace any possible contacts of confirmed COVID-19 cases, Prime Minister Justin Trudeau says that the federal government is ready to make thousands of contact tracing calls a day, seven days a week.

During his Friday morning address outlining the latest federal pandemic measures, Trudeau said that the federal government has trained federal employees who can make 3,600 contact tracing calls a day, and in addition, Statistics Canada has trained another 1,700 interviewers who can make up to 20,000 calls a day.

The federal government is offering this help to all the provinces and Trudeau said they are already helping Ontario by making some of their contact tracing calls.

On Thursday, Trudeau and Deputy Prime Minister Chrystia Freeland held their tenth call with provincial and territorial leaders since the pandemic was declared. That call included a conversation on the need to ramp up testing and contact tracing nationwide to improve the ability to identify cases and monitor the spread as more aspects of society begin to reopen.

The federal government has offered to take the lead on a national strategy as current rates are still lacking, particularly in Ontario and Quebec where the majority of current COVID-19 cases are.

On average 28,000 people are tested daily nationwide, though for many weeks the target rate federal health officials want to see as more restrictions lift is closer to 60,000 per day. In total, Canada has tested nearly 1.4 million people, and as of Friday morning there have been more than 81,000 confirmed cases, of which half are already recovered.

Chief Public Health Officer Dr. Theresa Tam said Thursday that, despite the number of tests done, with a population of more than 37 million the true infection rate remains unknown, and is likely much higher than current data indicates.

In a readout from Thursday evening’s call, the Prime Minister’s Office said a national strategy on COVID-19 testing “will help ensure that all regions of the country are testing at a sufficient level,” but will also include ensuring effective contact tracing and data sharing across the country.

“It is going to be important to increase testing now… but also make sure that as we move forward through the summer and obviously into the fall, we are ready to act extremely quickly so that the population at large won’t be in situations of having to go back into confinement,” Trudeau said on Thursday.

According the statement, the premiers “welcomed” the news this week, that the cross-border agreement to restrict non-essential travel between Canada and the United States has been extended until June 21.