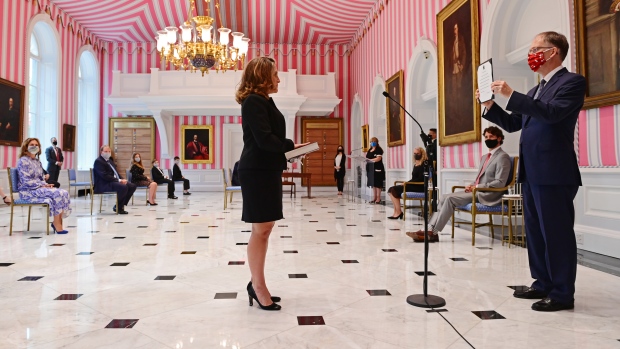 Trudeau said that in the coming weeks, the federal government will be plotting out and unveiling its roadmap out of the pandemic, which will include a throne speech to mark the beginning of a new legislative session.

While Trudeau vowed the prorogation will not impede the government’s COVID-19 response in the interim, suspending all House of Commons business means several ongoing committee probes into his government and the WE Charity controversy will be at least temporarily halted.

The new session is scheduled to begin two days later than the original fall sitting had been scheduled, and Trudeau defended the move as one that will allow for a confidence vote on the Liberals’ plans to navigate the country out of the current crisis.

“Canada is at a crossroads,” Trudeau said, citing the ongoing struggle with COVID-19, the calls for action on systemic racism, and the health-care, social and economic disparities the pandemic has exposed. He said the federal government’s focus is on plotting the long-term recovery plan.

“As much as this pandemic is an unexpected challenge, it is also an unprecedented opportunity. And this is our chance to build a more resilient Canada, a Canada that is healthier and safer greener and more competitive, a Canada that is more welcoming and more fair. This is our moment to change the future for the better,” Trudeau said.

Trudeau began a major summer reset of his government, adding new responsibilities onto two of his most trusted ministers in a mini-shuffle on Tuesday.

Deputy Prime Minister Chrystia Freeland is keeping her second-in-command role while taking on the finance minister portfolio, while her intergovernmental affairs responsibilities are being reassigned to Dominic LeBlanc, who also continues as President of the Queen’s Privy Council.

Freeland becomes Canada’s first female finance minister, and LeBlanc takes back a file he previously held: stickhandling relations with the provinces and territories. That had been taken off his plate as he focused on recovering from cancer.

The mid-August cabinet rejigging is the first move in what will be a cascading series of events effectively allowing the Liberal minority to hit the reset button, at a time when the COVID-19 pandemic has drastically altered the government’s agenda and calls from the opposition for Trudeau to resign or face a snap election continue in the wake of the ongoing WE Charity student grant controversy.

Tuesday’s physically-distanced Rideau Hall swearing in saw Freeland move into the role held by Bill Morneau for five years, until he announced late Monday that he was resigning from his key cabinet post and as an MP.

During his Tuesday address, Trudeau thanked Morneau once again for his time in cabinet and “tireless” work, and announced that while the two men were aligned on many things, there is one big place where they differ: Trudeau plans to be on the ballot the next time an election is called.

“We have lots of work ahead of us,” Trudeau said.

The prorogation will be the first time Trudeau has taken that massive procedural step, after vowing when first elected to not use “prorogation to avoid difficult political circumstances,” as the Liberals accused former prime minister Stephen Harper of doing.

News of Trudeau’s prorogation comes almost seven years to the day of Harper’s 2013 prorogation amid the Senate expense scandal.

A prorogation effectively ends the current Parliamentary session, killing all legislative business that has not passed. In this case means halting all ongoing WE Charity committee probes, and wiping away the remaining pre-pandemic pieces of legislation.

There are seven government bills that are on the order paper that have now died with prorogation, including legislation to amend the Criminal Code to amend the physician-assisted dying law and to effectively ban conversion therapy. There was also legislation proposing to set up new RCMP and CBSA oversight, as well as amending the oath of citizenship to recognize Indigenous rights that have now been wiped off the slate.

It’s possible for bills and committee work to be reinstated with a motion during a new session.

The House of Commons had one final special sitting scheduled for Aug. 26— where emergency COVID-19 measures could have been advanced, such as the expected Employment Insurance revamp— before remaining adjourned until Sept. 21. That is the date when parliamentary businesses was set to resume in earnest, with questions outstanding about the degree of COVID-19 precautions that will be in place and whether a continuation of the hybrid virtual and in-person sittings would resume.

A new throne speech and expected economic update to follow will both be key moments for the federal government to set out its reworked priorities, after the pandemic paused or forced a reassessment of many of the initiatives promised by the Liberals during the 2019 federal election.

In her historic new post, Freeland will lead the safe restart and recovery of our economy and LeBlanc will work with provinces and territories “to ensure the well-being, health, and safety of Canadians from coast to coast to coast,” according to Trudeau’s office.

“As economies relaunch we’re seeing COVID-19 reappear in places like Australia and New Zealand. It’s winter there now. Ours is still on its way and so we have to remain vigilant,” Trudeau said after the Rideau Hall ceremony.

At the swearing in, attendees donned face masks, used separate pens to sign the official documents during the ceremony, and gave congratulatory elbow bumps rather than handshakes or hugs, due to the ongoing COVID-19 pandemic.

With Payette currently under fire and facing a government investigation into allegations of harassment and aggressive behaviour within her office, there was some question of the role she would play in the Rideau Hall shuffle, though she presided over Tuesday’s ceremony in what was one of the first public appearances she’s had since the pandemic was declared.

Morneau’s sudden resignation led to concerns about how the economy would react given the ongoing economic crisis, though by tapping Freeland to take on that challenge and handing back some additional responsibility to LeBlanc, Trudeau is putting more responsibility on two of his most trusted ministers.

LeBlanc and Trudeau have been close friends for many years. He represents the New Brunswick riding of Beausejour, and was first elected to Parliament in 2004. He has also held a variety of cabinet posts, including government House leader and fisheries minister.

In a press conference prior to the shuffle and Trudeau’s address, Bloc Quebecois Leader Yves-Francois Blanchet said he looks forward to the Liberals meeting them in Parliament post-prorogation, where a throne speech provides a straightforward opportunity for a confidence vote, something he’s still pushing for.

Also reacting to the news, soon-to-be-replaced Conservative Leader Andrew Scheer accused Trudeau of “walking out on Canadians in the middle of a major health and economic crisis, in a disgusting attempt to make Canadians forget about his corruption.”

“Earlier this year, Justin Trudeau shamefully shut down Parliament to try and avoid accountability. Now he has locked out Opposition MPs who were working hard to fix his government’s pandemic programs, help Canadians and get to the bottom of his corruption scandal,” Scheer said.

“At a time when Canadians are looking for stability and leadership, Justin Trudeau has given them corruption, chaos, and cover-ups.”

NDP Leader Jagmeet Singh said he’s concerned the Liberals have become a party “more interested in holding on to power” than focusing on supporting Canadians through what continue to be tough times. He said having Parliament available to quickly pass new measures as they are needed is essential.

“We believe that the goal and the job of Parliament is to work for people to make sure they have help. In a pandemic we need to be there to do that work,” Singh said.

“I would just say generally speaking, we have a government of elites and self-serving snobs who look down on ordinary working class Canadians… That is the attitude of entitlement that we have come to expect from Trudeau and everyone he is put in positions of power,” said Conservative MP Pierre Poilievre on Tuesday morning, reacting to the shuffle news.

In the last month both Trudeau and Morneau had revealed they did not recuse themselves from the cabinet table when WE was awarded a deal to run a now-halted $912-million summer program, despite having close family ties to the organization.

Morneau later revealed he had recently cut a cheque for $41,000 to cover expenses WE Charity paid for his family during 2017 trips to Kenya and Ecuador.

Over a series of House committees a range of ministers have testified, as have several senior government officials, and MPs are awaiting the release of a trove of internal documents set to shed more light on the entire conflict of interest affair. Opposition MPs are now pushing to ensure this evidence is made public before any parliamentary shutdown.

Ethics Commissioner Mario Dion is currently investigating both Morneau and Trudeau, and both of those probes are set to continue and culminate in reports on whether federal ethics law was violated, even if Morneau is likely to be long out of office by the time it’s completed.

Morneau’s resignation also means there is another Ontario riding that will soon be up for grabs—one Liberal MP previously announced his seat will be vacant come Sept. 1—at a time when Trudeau’s minority needs to hold on to as many votes as possible.