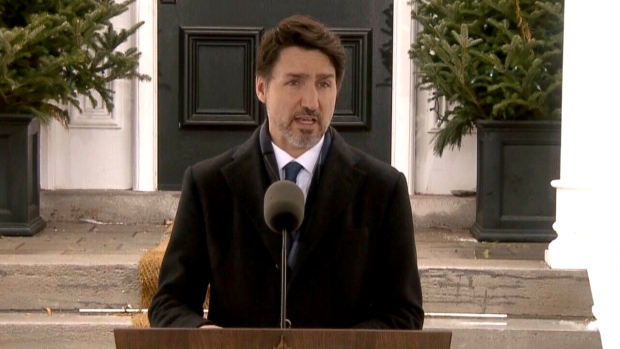 OTTAWA — Prime Minister Justin Trudeau is imploring Canadians to heed public health authorities’ advice to protect themselves and others amid the COVID-19 pandemic, emphasizing the importance of social distancing at this time.

He is also looking into recalling Parliament for a brief period in order to pass additional legislative measures, such as changes to employment insurance and potentially even enacting some aspects of the federal Emergencies Act, formerly known as the War Measures Act.

“There are economic pieces that will need quick passage in order to support Canadians,” Trudeau said. “We are also examining the emergency measures act to see if it is necessary or if there are other ways that will enable us to take the actions needed to protect people.”

Trudeau also offered thanks to all Canadians working on the front lines of this health crisis, and implored Canadians to do what they can to help lighten their load, including staying home.

“Things will get better,” he said, but said he isn’t sure if that will be in weeks, or months.

Trudeau provided Canadians with an update on the federal government’s COVID-19 measures from self-isolation at Rideau Cottage, emphasizing steps Canadians should be taking to limit the spread of the pandemic, like social distancing and vigilant hand washing.

Parks Canada will also be closing visitor services, meaning heritage sites and national parks will not be staffed.

The latest update from the federal government comes after Trudeau promised additional measures to help families on Monday. The virus has been spreading quickly across the world, and Canada is no exception.

A more fulsome support package for Canadian workers and businesses as well as measures to stimulate the economy will be rolled out by Trudeau on Wednesday.

As the government announced this week, effective Wednesday, Canada will be shutting its border to non-citizens looking to enter, with some exceptions, and offering a $5,000 loan to Canadians trying to get home. Several new measures are also being implemented at airports to enhance screening of travellers returning from abroad.

In advance of his address to the nation, Trudeau chaired a meeting with the federal cabinet.

Immediately after Trudeau speaks ministers and government officials will be providing an update on the novel coronavirus from Parliament Hill.

Additional measures would be on top of the previously announced $1-billion health and economic response package that includes relaxing EI rules, and would go beyond the $10 billion being made available to businesses who are being impacted by the virus.

At the time Trudeau began speaking, there were 450 confirmed cases of COVID-19 in Canada, and minutes later a fifth person was announced to have died after contracting the virus.