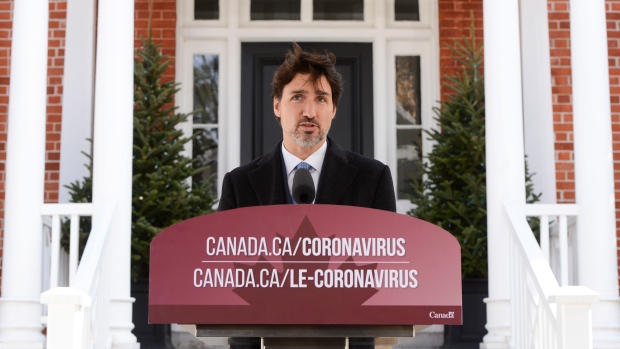 OTTAWA — Prime Minister Justin Trudeau will emerge once again Wednesday morning for what will be his 24th consecutive daily address to Canadians on the ongoing COVID-19 pandemic.

Anticipating a second parliamentary recall to pass the expanded wage subsidy, and shipments of more essential medical supplies, the prime minister will speak to the latest federal plans as the number of confirmed COVID-19 cases in Canada continues to climb.

There have been some positive indications that the spread is slowing in some parts of Canada, but with projections from Ontario, Quebec, and Alberta now indicating that there could be hundreds of thousands of cases by summer’s end, any return to normalcy could still be months away.

Trudeau has faced questions about why the federal government has yet to release comprehensive national scenarios on the scale of the virus’ spread.

As CTVNews.ca reported on Wednesday, by mid-February federal scenario planning had begun and it was being used to recommend further measures and to look at the social and economic implications “should the situation continue to evolve.”

This planning included the Public Health Agency of Canada conducting “advanced thinking and scenario analysis including a pandemic scenario” according to a briefing note labelled “confidential advice” for Health Minister Patty Hajdu to use during a call she held with her provincial counterparts on Feb. 10. It went on to say that Canadian governments “need to be prepared to respond based on the latest scientific evidence.”

These public health scenarios were to be used to “inform response planning, triggers for further measures and potential recommended actions across jurisdictions as the situation evolves,” according to another briefing note for a call nine days later.

Trudeau continues to say the government will have more to say about further help for Canadians, all of whom have, in some way, been impacted by the virus.

Since mid-March, more than four million Canadians have applied for financial assistance, but there are still many who are having trouble making ends meet and do not qualify for the benefit programs created so far.

The prime minister said at the start of the week that the federal government will soon introduce new measures to make the benefits accessible for those Canadians, such as contract workers and students.