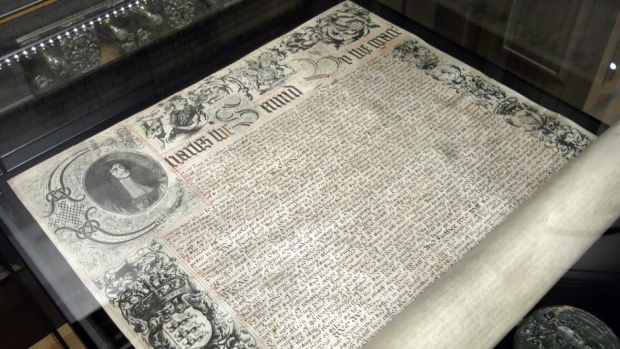 WINNIPEG — For the first time in its history, Hudson’s Bay Company is putting its Royal Charter on public display.

The 350-year-old artifact will be placed in the HBC Museum Collection already housed at the Manitoba Museum in Winnipeg beginning Saturday, September 12, and will be on display through to early 2021.

On May 2, 1670, King Charles II granted a Royal Charter to the “Governor and Company of Adventurers Trading into Hudson Bay,” launching what would become North America’s longest-operating company.

The charter established the original framework for the company’s governance and provided exclusive trading and land rights to the entire Hudson Bay watershed.

“It’s the first solidified example of what we know as Canada where Indigenous people’s land rights have been completely ignored,” said Amelia Fay, curator of the HBC Gallery at the Manitoba Museum.

Fay said the issue of land claims is just as relevant as it was 350 years ago.

“I’m hoping this document gets people thinking about land claims and land rights and how deeply seeded they are in our history,” she said.

Outlined in the charter, it gave HBC a trading monopoly for more than 40% of modern-day Canada. King Charles II named the area Rupert’s Land after his cousin and the company’s first Governor, Prince Rupert.

“As stewards of a history that began 350 years ago, we take great responsibility in acknowledging, preserving and sharing the history of HBC and Canada,” said Richard Baker, Governor and Executive Chairman of HBC in a news release.

“As we acknowledge our past and the role HBC played, specifically in the history of Indigenous Peoples, we are committed to encouraging discussion and learning, in part through access to artifacts and information such as the Royal Charter. While we look back on the past 350 years, this acknowledgement and education is vital to ensuring we create an inclusive and just path forward.”

The Hudson’s Bay Company Royal Charter is available for viewing in the HBC Gallery and is included with admission to the Manitoba Museum, Thursdays to Sundays between 11 am and 5 pm.