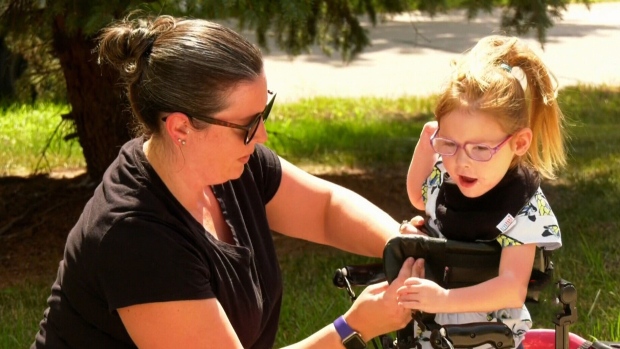 WINNIPEG — For many Manitobans, childcare services are considered essential, as parents rely on it daily.

The province has recently proposed amendments to the Early Learning and Childcare Act, which could put an end to some crucial childcare funding.

As a result of the proposed amendments, a petition has started to circulate that opposes the changes.

“By the end of preschool, she was having so much fun and she was so excited for the new year to start up already,” said Brinkman.

She said her daughter has cerebral palsy, global development delays, and epilepsy and said preschool is beneficial because of the social interaction.

But recently, Brinkman said she was told the preschool program could be in jeopardy.

“We received an email from the coordinator of the preschool that there was a threat to a grant that they rely on for funding. The Enhanced Nursery School Operating Grant.”

Laura Burla, who is the executive director of St. James Montessori School, said the grant was originally created to support Manitoba’s commitment to access, affordability, and quality childcare for all families.

“The federal government is committing millions to childcare as an essential service during this pandemic. It is baffling to understand why the province is going in the opposite direction,” said Burla.

She said the Enhanced Nursery School is a crucial part of Manitoba’s early learning and childcare framework.

Burla decided to start an online petition asking the Minister of Families and the Premier to reconsider amending the Enhanced Nursery School Operating Grant.

As of Wednesday evening, the petition has close to 2,300 signatures.

In addition to the survey, Burla is asking parents to go the province’s website and visit the Manitoba Regulatory Consultation Portal, where comments and submissions regarding the changes will be accepted until August 12th.

In a statement to CTV News, a spokesperson for the Minister of Families said, “There are no immediate plans to alter the Enhanced Nursery School Operating Grants or parent fees charges by nursery schools receiving these grants. The regulation can be passed without impacting the administration of the program,” the statement said.

“These regulations will simply provide our government with the legal foundation to make necessary changes to improve the nursery school system for families. Once a new model is determined, centres will be given significant advance notice.”

Brinkman said if funding were to stop for daughters preschool, it could be short $39,000. She said she is unsure about the future for the school.

“It’s just an important program for these kids. It really is, they’re learning so many important things. If they miss out on that, it’s pretty sad,” said Brinkman.