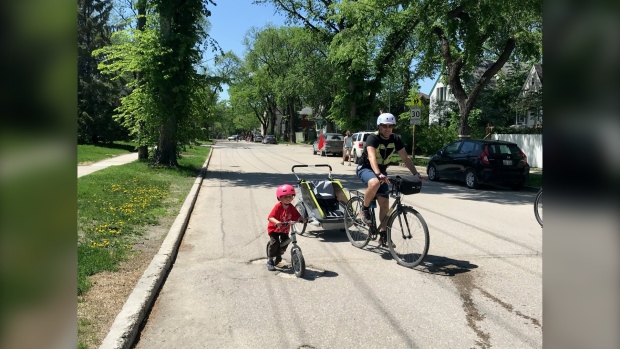 WINNIPEG — The Winnipeg Trails Association has launched an online petition to extend the city’s enhanced active transportation routes beyond July 6 – the date officials have chosen to discontinue the temporary measure.

“We saw that transit is not something that people were being able to rely on and we realize that a lot of people either don’t want to or, are not going to be able to afford to buy a car so we see this as the one possible light in kind of a dark time,” said Anders Swanson, the executive director of the association.

Swanson said the pandemic also highlights the need for a permanent active transportation network to give people safe and healthy ways to get to work, school, and appointments – something that’s also reflected in the petition.

The city expanded on four designated walking and biking routes, which are usually only in place on Sundays and holidays, to make more space for physical distancing.

It says limiting motor vehicle traffic to one block on nine streets seven days a week from 8 a.m. until 8 p.m. was meant to be a temporary measure in the early stages of the pandemic.

“However, we see the need for this temporary measure decreasing as people are allowed to move outside of their own neighbourhoods and as traffic volumes start to increase,” said Jason Shaw, the city’s manager of emergency operations.

City councillor Matt Allard wants the routes extended until the Labour Day long weekend. He plans to move a motion on the issue at Friday’s council meeting.

“It has virtually no cost for the city and it’s just being used so well throughout the city,” said Allard. “If my colleagues agree it’ll be something that’ll be well used throughout Winnipeg.”

City councillor Scott Gillingham is on board with the idea. He said keeping the expanded routes around throughout the summer would give the city a chance to collect more data on usage as part of a longer pilot project.

“By and large these routes are very, very popular and it’s a great way for individuals and families to stay active at this time while maintaining social distancing,” said Gillingham.

“The car-free streets have been really been huge for us to find somewhere to have a lot of fun with Noah,” Simeone said, noting he uses the routes for more than just leisure.

“We also do Lyndale Drive which is also a very fun place to bike on our way to the market for vegetables.”

He hopes the city will change course and keep them open.

In an emailed statement to CTV News, the city said as the province moves into phase two of its reopening, it feels it’s time to wind down the temporary routes.

It still plans to discontinue them on July 6.