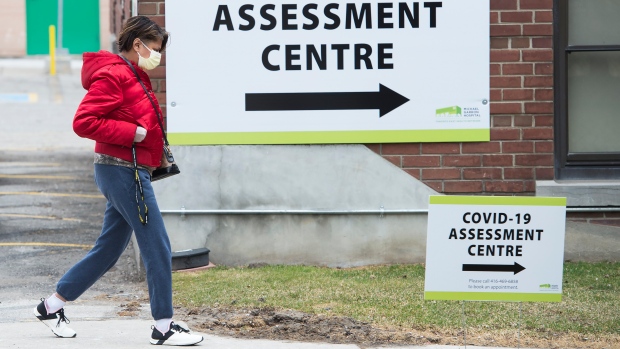 TORONTO — New numbers released by public heath officials reveal that one in three COVID-19 cases in Canada involve people under the age of 40.

Epidemiological data released Saturday by the Public Health Agency of Canada show that 28 per cent of the country’s cases involve people between the ages of 20 and 39. Another 115 cases, or 5 per cent, involve people 19 and younger.

The highest number of cases involve those aged 40 to 59, at 34 per cent of all cases, and nearly one-in-four cases involve people in their 60s and 70s.

But while the report shows that the majority of COVID-19 cases are among people younger than 60, it also says that those over the age of 60 make up more than half of all hospitalizations.

Canada’s Chief Public Health Officer, Dr. Theresa Tam, said in a press conference that about 7 per cent of all cases require hospitalization, and about 3 per cent of people become critically ill. So far, one per cent of cases have been fatal.

Dr. Tam pointed out in her update that getting clear data is difficult as the situation is constantly evolving.

“Even if you are not hearing of cases in your community, it doesn’t mean there are no cases,” she said, adding that many Canadians could still be awaiting lab results.

The new data included all cases up until 10 a.m. on Friday. As of Saturday evening, more than 5,500 people have tested positive for the virus in Canada and 61 have died.

Tam said in her update that “there are signs of hope,” pointing to preliminary reports out of B.C. that “the rate of growth appears to be slowing,” although she noted that it’s still early to make any conclusions about the virus’s ultimate trajectory.

More than one-third of all people who have been hospitalized, according to the data in the report, were in intensive care. Eighteen per cent have required mechanical ventilation.

People over 60 make up 57 per cent of all hospitalizations and 52 per cent of ICU admittances. Only those who are experiencing severe cases of COVID-19 are hospitalized in Canada.

The report also said that 60 per cent of the hospitalizations thus far have been men.

The report specified that their breakdown related to COVID-19 cases was made up of information from around 62 per cent of all cases, and that the data was preliminary, so there could be missing values.

Furthermore, data on hospitalization was only available for 35 per cent of those cases, meaning that it is unknown whether or not patients needed to be hospitalized in the remaining 65 per cent of cases.

Testing is essential to getting a clearer picture of the outbreak. Canada nearly doubled its overall number of tests completed in this week alone, Dr. Tam said.

“We have now completed tests for over 184,000 people in Canada, which is more than 84,000 additional people tested since Monday,” she said.

The report broke down testing by province to offer a glimpse of how different parts of Canada have responded to the pandemic.

Canada had tested around 165,000 people as of March 27, meaning that for every million people, around 4,400 people had been tested, the report says.

While Ontario has conducted the most tests, with over 41,000 completed as of March 27, the province’s rate compared to its population is one of the lowest in the country, having tested only 2,830 per million people.

“This early sign of reassurance should spur us to keep up with our new habits of physical distancing, despite the accompanying hardships,” Tam said.

“So we need to stay the course.”