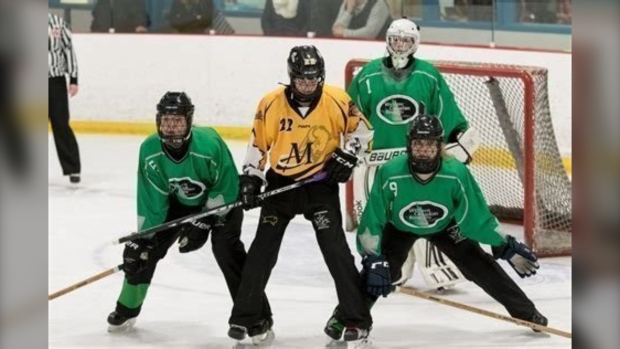 WINNIPEG — While sports such as hockey are resuming in Manitoba as part of their Return to Play plans, the same can’t be said for ringette in the province.

Players and parents have said Ringette Manitoba is behind compared to other sports leagues, and it means many people have not been able to play.

Rob Lentowich, who has kids who play ringette, said the majority of ringette leagues in the province aren’t allowed to play games and aren’t even allowed to have contact in practice.

He did note on Thursday, Ringette Manitoba allowed contact and five-on-five games to start for the AA program. Their games would start on Nov. 1, but he said it still leaves out a large group of athletes.

“I don’t see why one group should be allowed to be able to play the game and have fun, while all the other groups regardless of age or skill level are basically made to look on with envy,” said Lentowich, who calls the decision very one-sided.

Lentowich also created a petition to convince Ringette Manitoba to align its Return to Play guidelines with other leagues in the province.

He added that ringette is very similar to hockey, and Hockey Manitoba has already allowed games to resume.

“It’s incredibly frustrating due to the fact, for all intents and purposes, contact in ringette is extremely limited by the rules. You see hockey going on right now, full contact, playing hard, checking hard, and having fun and we aren’t even allowed to check in practice, let alone play games.”

He said when it comes down to it, the girls just want to play, and he noted because of that, some are jumping ship to other sports.

He feels the decisions Ringette Manitoba is making now could impact its membership in the future and he said other parents feel the same way, mentioning one comment made by another father on the petition.

“He said he has had daughters in the sport for 15 years and he said he is not surprised that Ringette Manitoba has been doing everything it can to drive people away.”

Lentowich said for those parents and players who are frustrated by the lack of play, they should go to their local clubs and boards and voice their concerns with the presidents, so they can go to Ringette Manitoba and make sure their voice is heard.

As of Thursday evening, the petition had over 1,900 signatures.

CTV News has reached out to Ringette Manitoba and has yet to recieve a response regarding its Return to Play decisions.