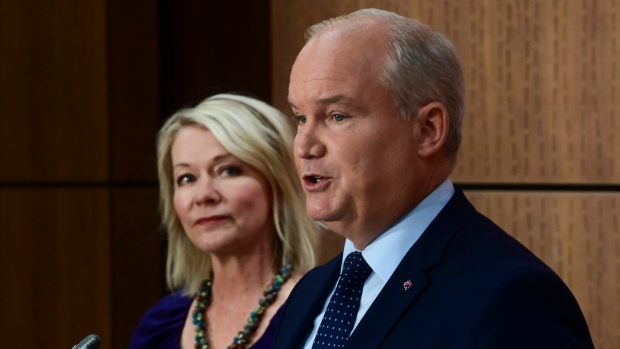 Bergen previously served as the Conservative House leader, an important role in managing the procedural workings in the House of Commons, and was first elected in 2008.

“I know these exceptional parliamentarians will help grow our team and ensure that more Canadians see a Conservative when they look in the mirror,” O’Toole said during the Wednesday announcement.

Bergen will be stepping into the role that was previously held by Ontario MP Leona Alleslev — the MP who crossed the floor from the Liberals to the Tories in 2018. Alleslev had stepped down from her House leadership position in July to back O’Toole’s opponent, Peter MacKay, in the Conservative leadership race.

The new Quebec Lieutenant, Martel, will be replacing Alain Rayes, who had served in the role under Andrew Scheer since 2017.

When pressed on the decision to drop Rayes from the new House leadership lineup, O’Toole expressed his support for Martel and said that Rayes would still be playing “an important role” in his shadow cabinet.

“I have a lot of respect for Richard. We walked closely together during the leadership race, he’s well known in local communities in Quebec, because he was a hockey coach. He will connect well with Quebecers before the next election,” O’Toole said, speaking in French.

O’Toole has also named rookie MP Eric Duncan as his new question period co-ordinator, and MP Karen Vecchio — who backed MacKay in the leadership race — as his deputy House leader.

Blake Richards, an Alberta MP, will serve as whip. Ontario MP Alex Ruff has been named his deputy.

O’TOOLE SAYS HE IS ‘NOT HERE’ FOR AN ELECTION

With a throne speech looming this month that could see the Liberal minority government toppled and an election called, O’Toole repeated that while the Conservatives are “ready” for an election, it’s not his priority.

“I’m not here for an election. I’m here for the relaunch of our economy post-COVID,” he said.

“I want to make sure we fight for the opportunity for Canadians in any part of this country to work to provide for their families. That will be our priority number one.”

However, O’Toole said the party is “united” and is “financially equipped” for an election.

“If they want to rattle the sabres, they will find that our sabre is sharp,” O’Toole said.

O’Toole was also asked about a now-deleted tweet from one of his MPs, Kerry-Lynne Findlay, which anti-hate groups and Jewish associations have said spread potentially dangerous anti-Semitic conspiracy theories.

Findlay had retweeted a video showing Finance Minister Chrystia Freehand with billionaire investor George Soros, commenting in her retweet that “the closeness of these two should alarm every Canadian.” This was retweeted by Conservative finance critic Pierre Poilievre.

Anti-hate groups saw the tweet as a far-right dog whistle, as it feeds into a conspiracy theory that the donations Soros — a Holocaust survivor — has made to progressive political causes indicate that he is trying to control the world.

O’Toole had not weighed in on the controversy until he was asked about it on Tuesday.

“I did call some leaders from the Jewish community to reinforce, in the House of Commons, the party that has been the strongest and loudest voice against the rise of anti-Semitism has been the Conservative Party and it will remain that way under my leadership,” O’Toole said.

He did not, however, say whether he had a conversation with Findlay about the tweet.

“I have removed the tweets and apologize to anyone who thinks I would want to endorse hateful rhetoric,” she wrote.