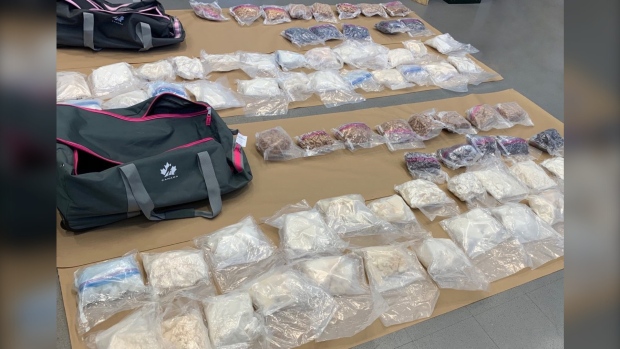 WINNIPEG — Two Ontario men have been arrested in Manitoba, after a traffic stop in Brandon resulted in a drug seizure worth millions of dollars.

Brandon police said officers conducted a traffic stop on July 28 at around 1:30 p.m. along Highway 1, west of the city. The stop led to an investigation into unlawful transportation of liquor in a vehicle.

During that investigation, officers discovered millions of dollars’ worth of drugs in the vehicle.

“In total, 76 kilograms of illicit drugs were located and seized from the cargo area of this vehicle,” Insp. Mike Pelechaty of the Brandon Police Service said in a video posted to the service’s website.

Pelechaty said after preliminary testing, police believe the substances include 50 kilograms of MDMA, commonly known as ecstasy, and 26 kilograms of a variation of substances combined with fentanyl.

The drugs were divided into one kilogram packages.

Following a bail hearing on Wednesday, the two men were remanded into custody.

“Illegal drugs of this nature are extremely dangerous to the users and our communities,” Pelechaty said, adding the number of fentanyl-related deaths continue to rise in Manitoba and across Canada.

“This is a significant illicit drug seizure that was stopped from entering our communities and has no doubt impacted the drug trade.”