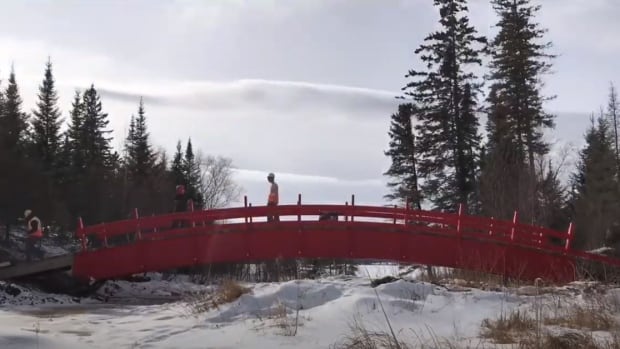 The province has moved two wooden pedestrian bridges that were once fixtures in a Winnipeg park to enhance trail networks in Whiteshell Provincial Park.

The red bridges were removed from King’s Park in south Winnipeg in 2017, when that park got two new accessible pedestrian bridges made of steel with a wood deck.

Installation and repainting of the red bridges in their new locations finished in July, Conservation and Climate Minister Sarah Guillemard said at a news conference on Friday morning.

Once the bridges’ footings were complete, their components were taken to a staging area, then flown by helicopter to their new sites, the province said in a news release.

“I have many fond memories of the red bridges, having grown up in Fort Richmond, and I know that my neighbours and friends here are thrilled that these landmarks will continue to provide use and beauty in a new location,” she said.

“They will provide much-needed passage across unique terrain within the Whiteshell Provincial Park.”

In total, the endeavour cost $327,650 — $195,000 of which came from the province, the release said. The money from the province was part of the $500,000 already announced in April to build and improve trails in provincial parks.

The rest of the cost was shared between Trails Manitoba and Trans Canada Trail, the two groups involved in the project.

People have shown more interest in exploring the province as travel is restricted during the COVID-19 pandemic, said Erik Dickson, president of Trails Manitoba.

“During this period of uncertainty, recreational trails have seen unprecedented activity,” he said.

“By highlighting investments in our trails and celebrating these achievements, we draw attention to our beautiful province, and promote healthy and active living.”

Contractor Pier Solutions, which was responsible for moving the bridges, also made “a significant donation,” the release said.