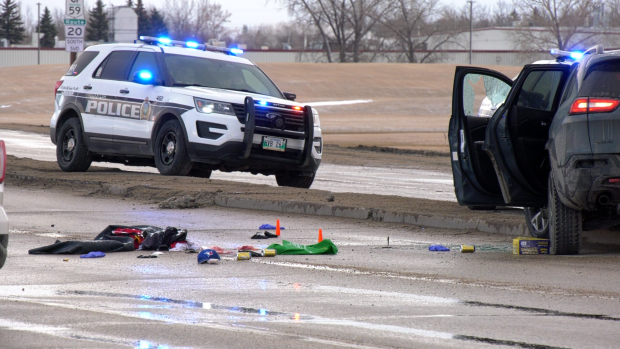 WINNIPEG — Winnipeg police say one person is in hospital after an officer-involved shooting Wednesday evening.

Police said the incident happened just after 5:30 p.m. at the intersection of Lagimodiere Boulevard and Fermor Avenue.

Photos from the scene show a number of vehicles surrounded by police tape. One vehicle – a dark CRV – was pushed up against a police cruiser and had its doors open. The front driver-side window appeared to have been smashed and items of clothing were strewn on the road.

Winnipeg police Const. Jay Murray said he wasn’t aware of the condition of the person in hospital, and the amount of information was limited.

He said a number of suspects have been taken into custody.

Police said multiple units, including the homicide unit, are investigating the shooting. The Independent Investigation Unit of Manitoba has been notified by police, Murray said.

Murray said police will provide further updates about the shooting on Thursday.