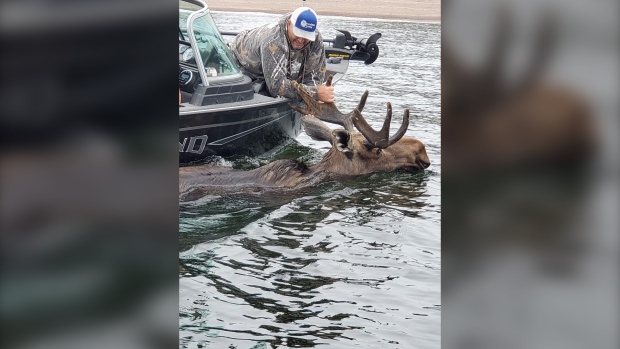 SUDBURY — A northern Ontario angler from Wawa took a big chance to save a moose from drowning in Lake Superior last weekend.

Steve Morin was out fishing with a friend when they noticed something moving in the water quite far from their boat and from shore.

“I said ‘let’s pull up, let’s go take a look,” said Morin, an experience moose hunter and guide. “We went out there and he was just swimming around in circles and dunking down every now and then.”

Because of his deep respect for animals, Morin wanted to help the animal to shore. He noticed that the bull’s ears were down and that it was struggling.

“Normally, when you approach an animal like that, it will try to get away from you, avoid you, and it will go in a straight line toward land,” said Morin. “So it just kept going around in circles and then eventually it was going to drown. So I told my buddy ‘we’ve got to do something.’ I just said ‘pull up beside him, I’m going to try to get a hold of him.”

Morin pulled the animal about a thousand feet to shore and said you could see the fatigue in its legs when it walked out of the water.

“It was still quite challenging because he is a big animal, he is 600-700 lbs and, you know, it’s kind of a struggle and you don’t know what is going to happen. He could, he’s got big antlers on him, he can use that as a weapon if he needs to, so you’ve got to be careful.”

He said he doesn’t recommend anyone trying to do that if they don’t know what they’re doing but is glad that everything turned out alright and the animal will be able to live to fight another day.

The last part of the rescue effort was caught on video by another boater and was witnessed by several kayakers.

Morin said it is the kind of story that is hard to believe unless you see actually see it.