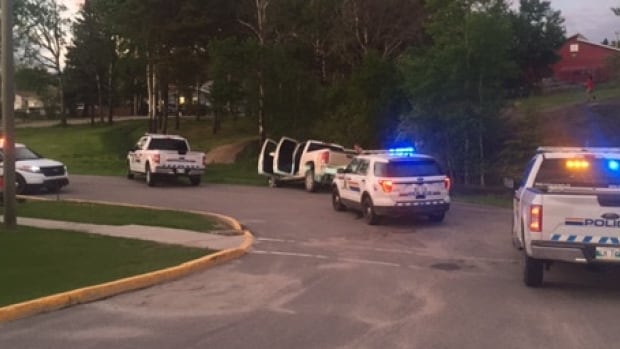 Three people were arrested in Flin Flon after RCMP say they kidnapped a man from a northern Manitoba fishing camp in his own vehicle on Monday, and then led officers from two provinces on a highway chase the next day.

A 20-year-old man was at a camp on Kisseynew Lake with a 36-year-old man and a 17-year-old boy when a vehicle rolled up with three people inside, RCMP said in a news release on Friday.

Two men got out of the vehicle and asked the people at the fishing camp if they had any guns. They then assaulted the 36-year-old, threatened him with a knife, stole one of the men’s rifles and grabbed the 20-year-old, according to RCMP.

The kidnappers pushed the 20-year-old into his own pickup truck and told him he was going to drive them to Winnipeg, roughly 650 kilometres to the southeast.

They also stole the other two fishers’ cell phones, leaving them stranded without a vehicle or a phone at the camp, about eight kilometres from the Pukatawagan winter road junction and about 50 kilometres from the Highway 10 junction, Mounties said.

The next evening, the 36-year-old man’s father, who is from the nearby community of Sherridon, Man., arrived at the fishing camp and learned what happened. He immediately went to the RCMP’s Flin Flon detachment and reported the kidnapping at 6:35 p.m., the release said.

Mounties issued a notice to surrounding areas Tuesday evening with a description of the stolen truck. Officers from three communities along the Manitoba-Saskatchewan border — Cranberry Portage and Flin Flon in Manitoba, and Creighton, Sask. — patrolled Highway 10 and eventually found the group.

Officers tried to pull the truck over, but the driver didn’t stop. They chased the truck down the highway, twice using a spike belt to try to slow it down. Damaged by the spikes, the truck continued down the highway and eventually drove several blocks into a residential area in Flin Flon and stopped.

The people in the truck tried to run, but were quickly arrested, RCMP said. The kidnapped man was found in the truck “unharmed but quite shaken up.”

Officers found a loaded gun and a large filleting knife inside the truck.

Two men and a woman were charged with a range of offences.

“The professionalism and teamwork of our detachment members resulted in the victim being brought to safety and the suspects being taken into custody without anyone being harmed,” Lewis said in the release.

“I am proud of the actions of our members in bringing this event to a successful conclusion.”

Those charges include kidnapping with a firearm, robbery with a weapon, robbery to steal a firearm, theft of a vehicle, dangerous operation of a motor vehicle, flight from police, assault and uttering threats.

Both men were taken into custody.

A 28-year-old woman from Denare Beach was charged with kidnapping with a firearm, theft of a vehicle, possession of a weapon for a dangerous purpose and unsafe storage of a firearm. She was later released on court-imposed conditions and is scheduled to appear in Flin Flon court on July 14.