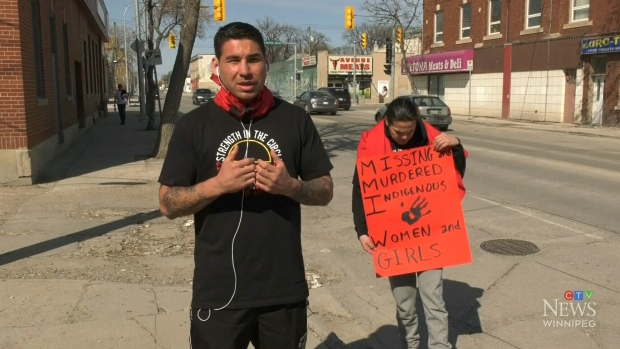 WINNIPEG — On May 5 people all over North America will wear red to honour and remember Murder and Missing Indigenous Women Girls and Two Spirited People.

Claudette Osborn Smith-Tyo was last seen on Selkirk Avenue. She disappeared without a trace.

“Indigenous women and girls are more at risk to go missing in this country and it didn’t seem to be on people’s radar for a very long time. In 2006 the Native Women’s Association of Canada did a report and that was kind of the first time that people started talking about it,“ said Smith.

When she sees the community come together in support of MMIWG and MMIWG2S families by wearing red, Smith said it feels like people are listening.

Canadian Army Veteran, Cpl. Johnathan William Rob Meikle and his friends Matthew Shorting and Jamie Felix will be doing their part in bringing attention to the MMIWG crisis. Meikle said the traditional role of indigenous men is to protect women, children, and the elders. He hopes to remind other men of this role and their healing is important in the fight against the MMIWG and MMIW2P.

“Learn your role in community and in order to do so, in order to be a man, we need to look to the women and the children,” said Meikle.

They will be running through Winnipeg’s North End with while holding a red cloth to symbolize a red dress. He said they picked the North End because it carries a stigma of negativity.

“But I see the good, I find such a strong sense of community in the North End. I see people trying to help each other out. I see people coming together when things do happen and I want to show the love and support for families for those that have personally lost somebody,” said Meikle

The 2019 updated report by the Native Women’s Association of Canada said over half of the cases the women were just under the age of 31.

While 17 per cent were 18 years-old and younger. Of the cases they have tracked, 70 per cent of women and girls disappeared in urban areas and 60 per cent of those case the victim was found murdered also in an urban area.

And almost half of the cases are unsolved. The NWAC states Indigenous women are three times more likely to be killed but a stranger than non-indigenous women.

“My daughter is 17, I have two granddaughters one that just turned eight and another one that’s six, and I fear for them. I even fear for my own safety walking out my door because we’re five times more likely to walk out our door and never been seen again,” said Smith. “Canada has allowed this to happen.”

In 2019 Canada released the final MMIWG report, saying the cases are at least up to 1,200. But Smith says that only reflect the number of cases up that point for the last 30 years.

“While the National Inquiry was going on there were still women who were still continuing to be murdered, continuing to go missing. There were no targetable actions put into place while the report was actually being formed,” said Smith.

She said there were 231 inquiry calls to action come out, but she hasn’t seen too much implementation from cities, provinces or the federal government.

The MMIWG and MMIWG2S is not something Canada faces alone.

“A lot of people are standing up together saying we can’t allow this to continue. And we need to stand united and say we are all humans,” said Smith.

The Urban Indian Health Institute is located in the United States and part of the Seattle Indian Health Board. In a report from 2016 they collected data from 71 urban US cities.

They say nearly 6,000 Indigenous women have gone missing. 506 of those cases identified in the report are “Likely an undercount of MMIWG in Urban areas.” In 2016 they say a total of 5,712 were reported but the U.S. Department of Justice only logged 116 cases.

Ashley Loring Heavy Runner, a post-secondary student, is from the Blackfeet Nation in Montana. Heavy Runner has been missing since June, 8th 2017. In an interview with CTV her sister Kimberly Loring Tougui said she has been searching for Ashley since she went missing and hasn’t given up hope.

“We are still searching and trying to get her name out there more. We are holding on to hope that we will bring Ashley home soon,” said Tougui.

Smith said the hardest thing about losing a loved one like this, is not having any answers.

“(Its) super frustrating, you know my niece is going to be 12. That means my sister has been missing for 12 years. Her birthday is on May 15th. It’s tough for our family every day we pray there’s not a moment that goes by that don’t think about her. And we know somebody knows something out there,” said Smith.

Both Smith and Tougui said everyone knows someone who has been impacted by the MMIWG and MMIWG2S. Smith said she hopes that all families can live free without violence.