Home  »  News   »   No need yet for state of emergency in Winnipeg, officials say 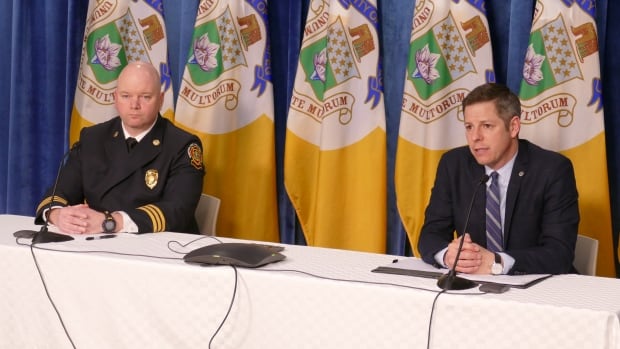 There is no need for the City of Winnipeg to declare a local state of emergency right now, the city’s mayor and emergency operations manager said during an update on Winnipeg’s response to the COVID-19 pandemic.

The city is working “in lockstep” with provincial officials, who declared a provincewide state of emergency last week, to reassess the situation each day, said Jason Shaw, the manager of the city’s emergency operations centre.

“If there’s a need for us to declare a state of local emergency, we will do so,” he said.

Shaw and Mayor Brian Bowman spoke at city hall Tuesday afternoon about the city’s response to the coronavirus outbreak.

“Winnipeggers like you are taking concrete action to make sure physical distancing doesn’t mean turning your back,” Bowman said, thanking the residents of the city for making it better.

“Winnipeggers have a reputation for generosity. We’re the kind of people who help out our neighbours,” he said, adding there is no more appropriate time to step up and offer to check in on others, pick up groceries and donate blood.

Shaw said the emergency operations centre is continuing to operate at Level 2.

“At the front lines, the focus is on first responders,” he said, meaning police, fire and paramedic crews, and others working directly with those affected by COVID-19.

Many city services are closed, but the 311 service is still operating. City park permits for large gatherings of more than 50 people have been cancelled.

Nothing is off the table.– Jason Shaw, City of Winnipeg manager of emergency operations

“We recognize the importance of needing to balance social distancing with the positive mental health and well-being aspects of being able to get outside,” he said.

“We encourage people to go outside and use social distancing.”

The Manitoba government’s declaration of a state of emergency helps move along its public health orders, he said, but a municipal state of emergency would only be required if “we felt like there were additional powers underneath that directive.”

Shaw said the province has not asked the city to begin enforcing public health orders under the Emergency Measures Act, which is the province’s responsibility.

Transit buses will continue running, with new electronic signs and stickers reminding the public to keep a safe social distance.

Shaw said the city is not planning to allow transit riders to enter through the back door of buses.

“Nothing is off the table but at this point right now, rear loading on buses has not been something deemed as necessary.”

Protective shields for transit drivers were put up long before the COVID-19 outbreak for the safety of the operators, he noted. While not every bus has a shield yet, only those with the protective shields installed are on the roads right now, he said.

When asked about the news that New Flyer is laying off permanent and part-time workers, Bowman said COVID-19 is “having a horrible impact on our business community.:

That’s why, he said, city council is looking at what it can do to provide relief in addition to the federal government’s previously announced $82-billion relief package.

“Those are my two priorities right now … our most vulnerable citizens in our community as well as businesses who we know are hurting and are having real liquidity concerns,” Bowman said.

He gave no timeline for when businesses can expect the burden to ease.

“What I can say is that our staff were working through the weekend. The direction was provided by council to them on Friday, and so we’re in Day 2 of the week, and I can tell you they are absolutely prioritizing,” he said.

In a news release issued shortly before the news conference, the city announced a new COVID-19 business task force to deal with the impacts of the pandemic on businesses in Winnipeg.