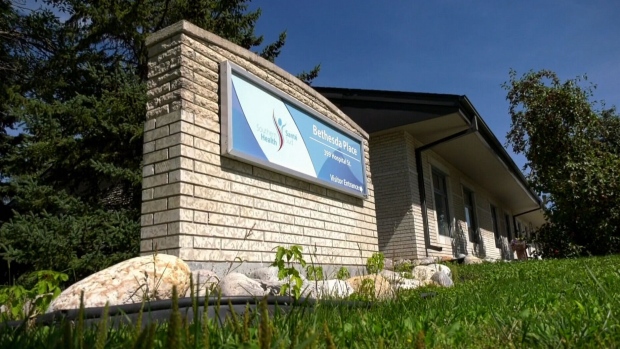 WINNIPEG — Another person connected with the outbreak of COVID-19 at a personal care home in Steinbach, Man. has died.

The person who died was a woman in her 90s from the Southern Health-Santé Sud health region and is associated with the outbreak at the Bethesda Place care home in Steinbach.

Roussin said this is the 14th death due to COVID-19 in Manitoba.

In addition to the death, Roussin announced 22 new cases had been identified in the province as of Thursday morning, however, a previously announced case from August 15 has been removed.

This brings the total number of active cases in Manitoba to 407.

The new cases announced on Thursday include:

The province said seven of the new cases have been identified as close contacts of a previously announced case.

The province also said a previously announced case has been identified as a health care worker at the Rideau Park Personal Care Home in Brandon. The province has declared an outbreak at the home, and moved site to critical in the province’s pandemic response system.

The total number of lab-confirmed cases of COVID-19 in Manitoba is now 1,064 since March 12. The current five-day test positivity rate is three per cent.

As of Thursday morning, there are six people in hospital, one of whom is in intensive care. A total of 643 people have recovered.

WHERE THE MOST CASES OF COVID-19 ARE IN MANITOBA

As of Thursday, the Prairie Mountain Health region had 212 active cases – the highest level of COVID-19 cases in the province. The majority of these cases are in the Brandon district, which has 126 active cases.

Not including the Brandon district, the areas in Manitoba that have the highest level of active cases include:

Roussin said of the 97 active cases in Winnipeg, a lot of them are linked to previously announced cases, but said about 20 per cent of the cases have been identified as community-based transmission.

“We’re going to see cases,” He said. “The majority of them are people who have been self-isolating, but we do see some community transmission.”

On Wednesday, an additional 1,429 laboratory tests were completed, bringing the total number of tests done since early February to 130,835.