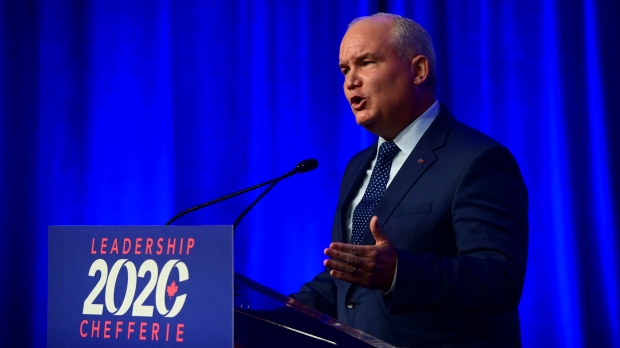 OTTAWA — Newly elected Conservative Leader Erin O’Toole will speak to reporters today for the first time since his victory in the leadership race.

His plan for a news conference after the results were announced was scuttled after delays in vote counting pushed the reveal into the wee hours of Monday morning.

O’Toole spent his first day on the job meeting with senior members of the party, including former leader Andrew Scheer, as he strives to refresh the Opposition Leader’s Office and the party’s front benches.

A key strategy for the O’Toole campaign had been to focus on the fact that he had a seat in the House of Commons and was ready to start the work to defeat the Liberal government right away.

He and Prime Minister Justin Trudeau did speak Monday, a call both sides said was cordial and touched on the rigours of a campaign as well as also the prorogation of Parliament.

It’s set to return on Sept. 23 with a throne speech laying out the minority Liberal government’s post-pandemic plan and will be followed by a confidence vote.

This report by The Canadian Press was first published Aug. 25, 2020.