Home  »  News   »   New bridge over floodway to be completed by 2023: Infrastructure Minister 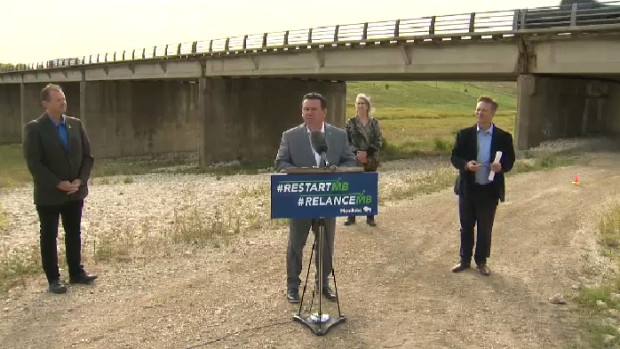 WINNIPEG — The province is one step closer to building a new bridge over the Red River Floodway on Provincial Trunk Highway (PTH) 59.

Infrastructure Minister Ron Schuler announced at a news conference on Tuesday morning that the Manitoba government is moving forward with the tendering process.

“Our governments’ priority is safety; this bridge is 56 years old, deteriorating and requires replacement as it has exceeded its original design service life,” Schuler said.

“Over 17,000 vehicles cross this bridge daily and we need to ensure the safe movement of both people and goods can continue.”

The bridge was constructed in 1964, and according to the province, serves as a vital link to many Manitoban destinations such as Birds Hill Provincial Park, Whiteshell and Grand Beach, as well as a link to First Nations communities and several towns and villages.

North and southbound bridges will be built to replace the existing structure and roadway realignments will take place, with construction slated to begin this fall.

In addition, the bridge replacement will have an increased clearance of 1.5 metres in height to meet new floodway standards. The province said construction will take place in a way that accommodates the operation of the Red River Floodway.

“We are excited to be moving ahead with the new PTH 59 bridge,” Schuler said. “This is a much-needed investment in critical infrastructure as we work to restart Manitoba’s economy.”

The minister said the bridge is anticipated to be completed and fully open to traffic by fall of 2023.