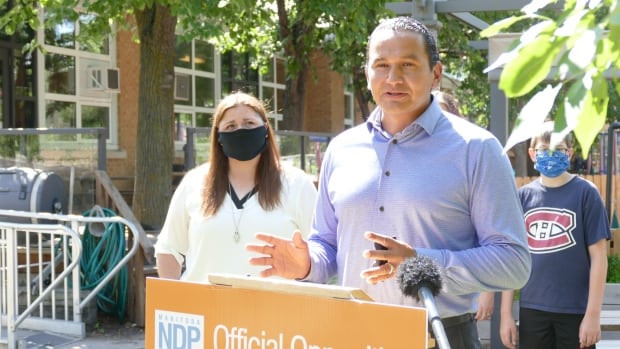 The Manitoba NDP is rallying against proposed changes to early childhood education that may strip funding from child-care centres and eliminate a cap on some parent fees.

The Official Opposition is calling on the government to back off from the proposal, which it is seeking public feedback on.

The government is thinking of axing the enhanced nursery grant — a pool of money that lets nearly 70 nursery programs charge parents as little as $5 a day.

It may also lift the cap on parent fees, but only at unlicensed child-care spaces.

NDP Leader Wab Kinew spoke against the plan at a news conference Thursday outside Discovery Children’s Centre in St. James.

“Now’s not the time to be cutting child care,” he said, referencing the challenges that some families are facing during the pandemic.

“Now is the time when any rational government that cares about the people of Manitoba should be making investments in strengthening child care and making sure that early childhood education is strong.”

She said losing the grant would eliminate tens of thousands of dollars in funding to her centre alone. She couldn’t make up the shortfall, even if her facility doubled the price to parents.

“Really, what we need from the province is a little bit of rational thinking,” Burla said. “We need them to make investments in child care, not cuts.”

The Manitoba Child Care Association said on its website that revoking the grant would be a “regression for Manitoba’s child care system.”

The provincial government said its plan would eradicate a two-tiered system, where there’s “no difference in the services offered other than the additional funding provided to offset lower parent fees.”

As it stands, 66 of Manitoba’s approximately 162 nursery schools receive $4,180 per child-care space per year, yet the remaining 96 programs only collect $528 for the same space per year.

“There are no immediate plans to alter the enhanced nursery school operating grants or parent fees charged by nursery schools receiving these grants,” said a statement from the office of Families Minister Heather Stefanson.

“The regulation can be passed without impacting the administration of the program, and once passed these regulations will simply provide our government with the legal foundation to make necessary changes to improve the nursery school system for families. Once a new model is determined, centres will be given significant advanced notice.”

The public can weigh in on the plan until Aug. 12 through the Manitoba Regulatory Consultation portal.