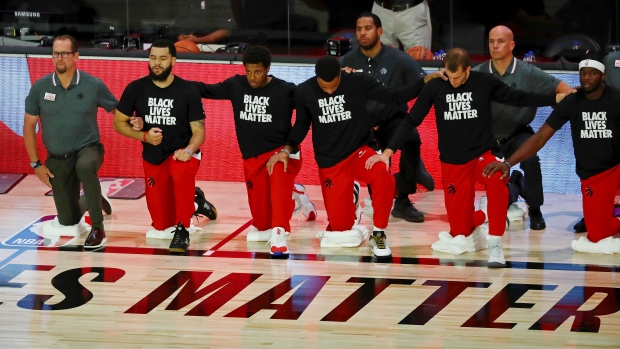 TORONTO — In his first game back following the NBA’s COVID-19 shutdown, Toronto Raptors star Kyle Lowry was asked about his team’s decision to kneel during the Canadian and U.S. national anthems.

“To be down there for four straight minutes … to think about another human being kneeling on another human being’s neck for eight minutes and 46 seconds, that’s a bad thought to have, an unbelievable messed up thing that that man did to an innocent Black man,” Lowry told reporters following the game, referring to the death of George Floyd.

For weeks, NBA players such as Lowry have been speaking out following a series of police shootings of Black people that sparked wider conversations about racism and injustice. Almost every player in the league has added a racial justice-themed call to action on the back of their jersey, and the words “Black Lives Matter” are emblazoned in capital letters across the basketball court.

In the boldest move yet, the Milwaukee Bucks — the NBA’s top team — decided Wednesday to boycott Game 5 of their playoff series against the Orlando Magic to protest the shooting of Jacob Blake, a Black man who was shot in the back multiple times by police in Wisconsin as he tried to enter a vehicle with his three children inside.

Blake, 29, survived the shooting but is now paralyzed from the waist down, his lawyer says.

After the Bucks’ boycott, the NBA postponed all three of Wednesday’s playoff games.

On Tuesday, the Raptors met with the Boston Celtics to discuss the possibility of boycotting Game 1 of their upcoming Eastern Conference semifinal series, scheduled for Thursday. A decision has not been finalized.

Here’s a look at how NBA players and coaches have spoken out about racial injustice.

Fred VanVleet says that, following Blake’s shooting, basketball is the last thing on his mind, telling reporters Tuesday that he “couldn’t care less” about the upcoming game.

“You know, coming down here and making a choice to play was supposed to not be in vain, but it’s just starting to feel like everything we’re doing is going through the motions and nothing’s really changing,” VanVleet said.

“Here we are today with another unfortunate incident, so my thoughts today are with that man and his family and trying to wrap my mind around what they’re going through.”

He also expressed frustration that the onus is on Black men, like himself, to lead a difficult conversation even as more people get shot.

“At what point do we not have to speak about it any more?” he said.

“Are we going to hold everybody accountable, or are we just going to put the spotlight on Black people or Black athletes or entertainers and say ‘What are you doing? What are you contributing to your community? What are you putting on the line?”’

Basketball legend LeBron James is one of a handful of players in the league who hasn’t added a Black Lives Matter message on the back of his jersey. The reason, he says, is because he preferred to pick his own slogan rather than pick from a pre-approved list provided by the NBA, which included Black Lives Matter, Equality, Say Her Name, See Us, Listen and Education Reform.

Several players expressed frustration that the NBA’s list of slogans did not include the word “police.”

Regardless, James has been vocal in interviews and on social media about the reckoning on race. Following Blake’s shooting, James tweeted “F—- THIS MAN!!!! WE DEMAND CHANGE. SICK OF IT.”

He’s also spoken candidly about what it feels like to encounter the police as a Black man.

“I said it, I know people get tired of hearing me say it, but we are scared as Black people in America. Black men, Black women, Black kids, we are terrified,” he told reporters in a recent post-game interview.

Stephen Curry has taken his activism beyond basketball, having recently worn a pair of golf shoes with Breonna Taylor’s name on them during the American Century Championship.

Taylor, a 26-year-old Black woman, was shot eight times by police in her apartment after officers executed a no-knock search warrant and exchanged gunfire with her boyfriend.

Curry has spoken about what it’s like to be seen as a “rich, successful” Black person, and says white people need to do more to call out subtle racism.

“If another white person hears that comment, they’re going to think the same thing. And it’s not going to trickle down to anybody else and be able to create opportunities for somebody else to get that in that room and prove their value. Prove their worth,” he said.

“Whatever it is, to do the right thing, no pun intended, but to see everybody as equal and that’s all we’re asking for.”

Doc Rivers has directly called out U.S. President Donald Trump, who has tried to characterize anti-racism protesters across the U.S. as a group of violent radicals who pose a threat to suburban America.

Rivers, who wore a face mask that read “VOTE,” held back tears as he accused Republicans of “spewing this fear” at this week’s Republican National Convention.

“All you do is keep hearing of fear. It’s amazing to me, why we keep loving this country, and this country does not love us back. It’s just really so sad.”

Similar to LeBron James, former Raptors player Kawhi Leonard chose not to wear one of the NBA’s pre-approved messages. Leonard says that he’s long been invested in supporting the Black community, and he’s constantly working to educate others.

“What’s happened, what everybody has been seeing on the news, it’s been like that for me. I’ve been seeing those situations, so it’s nothing new to me, and I’m still going to help and educate people as well as my teammates,” he said.

“It doesn’t matter if we have a statement on the back of our jersey, it’s about doing the work.”

Norman Powell wanted to go with the slogan “Am I Next?” on the back of his jersey, but it wasn’t among the list of pre-approved messages from the NBA.

Powell expressed frustration at what he called a “cookie-cutter” list, but settled on “Black Lives Matter.”

“They believe they’re following the law and they think that’s OK,” Powell said. “‘We did an investigation and we found them not guilty.’ And they go home and sleep at night perfectly fine. They live their lives and go to their jobs.

“Until they’re on the line for getting fired and having to lose everything, nothing’s going to happen.”

As he tried to join his team to celebrate the 2019 NBA Championship victory, Masai Ujiri was shoved by a California sheriff’s deputy. New body cam footage released last week shows the moments leading up to the shove.

Ujiri said the altercation is clear evidence that there’s a long way to go in striving toward racial justice.

“I was reminded in that moment that despite all of my hard work and success, there are some people, including those who are supposed to protect us, who will always and only see me as something that is unworthy of respectful engagement. And there’s only one indisputable reason why that is the case — because I am Black,” he said.

“What saddens me the most about this ordeal is that the only reason I am getting the justice I deserve in this moment is because of my success. Because I’m the president of an NBA team, I had access to resources that ensured I could demand and fight for my justice. So many of my brothers and sisters haven’t had, don’t have, and won’t have the same access to resources that assured my justice. And that’s why Black Lives Matter.”