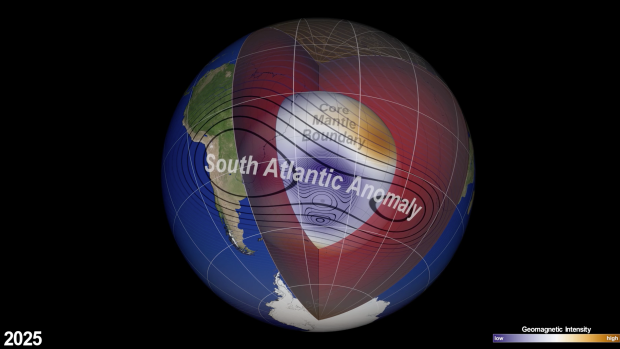 TORONTO — NASA researchers have been tracking a strange new development in an already strange phenomenon: the dent in Earth’s magnetic field appears to be splitting in half.

Currently, this anomaly does not impact us on the ground in any way. But when satellites pass through the anomaly, they have to account for extra radiation — and studying this so-called “dent” allows scientists to learn more about Earth’s magnetic fields and plan for future space missions and satellites.

A visualization released on Monday of the changing magnetic fields between 2015 and 2025 shows the anomaly splitting off into two distinct regions in the next few years.

It also shows that the distortions in the magnetic field aren’t just occurring above the planet — they are happening deep inside of Earth as well, at the boundary between the mantle and the molten core.

SO WHAT IS GOING ON?

Earth’s magnetic fields are far more complex than they appear. Although they function somewhat like a bar magnet (a dipole), with North and South poles, the magnetic field itself can fluctuate and change, as it results from the constant churning of Earth’s liquid iron core, which generates electrical currents.

The magnetosphere is where solar winds interact with Earth’s magnetic fields. The pressure of these winds are what forces the magnetic field to curve around the dayside of Earth, and expand out into space in a tail from the nightside of the Earth, like water moving around a rock in a stream. Because the Earth is constantly turning, presenting a new side of the Earth towards the Sun, the magnetosphere is always changing shape.

Energy coming off of the Sun can sometimes interact with the magnetosphere in ways that create what is called “space weather events.” These events, such as geomagnetic storms, can threaten human technology and communications around the Earth, as well as astronauts in orbit. Satellites, GPS, electric power grids and even the flights of commercial airlines can all be disturbed by a stormy day in space.

Charged particles that make it through the first layer of the magnetosphere can get trapped in something called the Van Allen Belts, which are belts of radiation around the Earth. These belts are far enough away from the Earth’s surface to prevent us from feeling the effects of this radiation, but where they interact with the SAA, more particles can get closer to Earth.

If Earth’s magnetic field is like a blanket around the planet, protecting us from charged particles from the Sun, the SAA is a place where the material has worn thin.

According to NOAA, the SAA allows “cosmic rays and charged particles to reach lower into the atmosphere.” They note that the anomaly can change in intensity, and can affect satellites because it is full of “high energy particles that can penetrate the skin of the spacecraft and cause upsets in spacecraft electronics.”

Satellites hit by high-energy protons can short-circuit or have issues communicating with the ground.

The International Space Station has also experienced issues when passing through the SAA. While the humans on board are well protected from radiation, instruments that collect information from the outside of the ISS can be reset by the trip through the anomaly, or register blips in their data.

Weijia Kuang, a geophysicist and mathematician in Goddard’s Geodesy and Geophysics Laboratory, said in an article about the SAA splitting on NASA’s website that what we are currently seeing with the SAA could be “a consequence of weakening dominance of the dipole field in the region.

“More specifically, a localized field with reversed polarity grows strongly in the SAA region, thus making the field intensity very weak, weaker than that of the surrounding regions.”

Terry Sabaka, a geophysicist at NASA’s Goddard Space Flight Center, is one of the scientists tracking the SAA, along with Kuang.

Using data from the European Space Agency’s Swarm constellation, which is a trio of identical satellites, as well as previous information from various agencies, scientists are aiming to forecast changes in the magnetic field and the SAA into the future.

“Even though the SAA is slow-moving, it is going through some change in morphology, so it’s also important that we keep observing it by having continued missions,” Sabaka said in the article on NASA’s website. “Because that’s what helps us make models and predictions.”

Scientists are hoping that by tracking the SAA’s split, and the geomagnetic forces surrounding the Earth, they can prepare for issues that may arise in the future for satellites and astronauts.