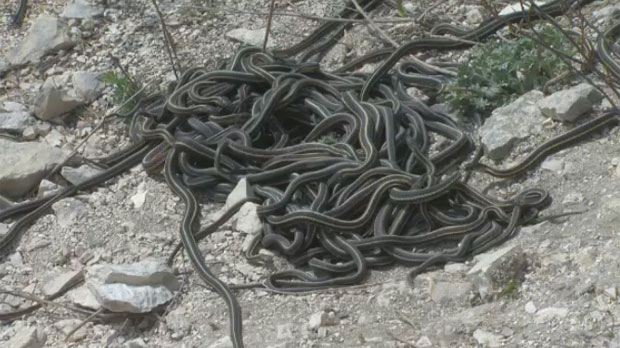 WINNIPEG — Any plans to visit the Narcisse Snake Dens this Mother’s Day weekend will have to be put on hold, after the province announced they are closed until further notice.

Every year around this time the Narcisse Snake Dens fill up with thousands of snakes surfacing form their winter dens. The Province of Manitoba announced on Friday that due to public health orders limiting gatherings to 10 or fewer people, the snake pits will be closed to the public.

Though Manitobans may not be able to witness it, the snakes are still expected to come out in full force.

The province said each year in late April or early May, the red-sided garter snakes begin their annual mating ritual, referred to by the province as a ‘mating ball’ where one female snake is surrounded by up to one hundred male snakes.

The province said the greatest activity tends to coincide with Mother’s Day weekend.

On a normal year, Manitobans can take in the slithering spectacle on a three kilometre self-guided interpretive trail.