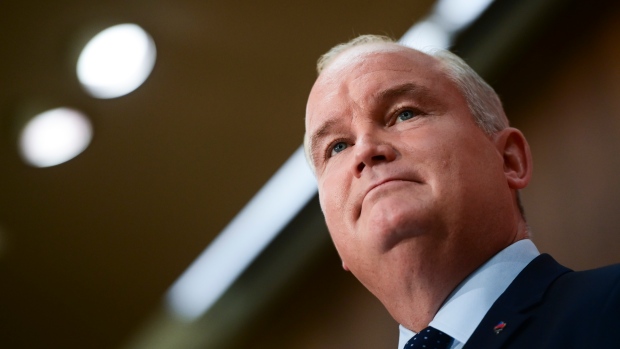 TORONTO — Canadians are more likely to say they are not open to voting for the Conservatives in the next federal election than they are to say they are open to doing so, according to a new survey by Nanos Research.

However, that is not the case when it comes to male voters and those who reside in the Conservative heartland of the Prairies.

Nanos conducted the survey for CTV News between Aug. 31 and Sept. 3, and specifically asked about openness to voting for the Official Opposition under newly installed leader Erin O’Toole.

The most common response was not open, which 44 per cent of respondents selected. Another eight per cent said they were somewhat not open to voting for the Conservatives.

Willingness to vote for the Conservatives was highest by far in the Prairies, where 63.2 per cent of respondents reported being either open or somewhat open to the party. This is roughly in line with the Conservatives’ vote share in the 2019 federal election in the region, where they won 54 out of 62 seats.

Nanos measured openness or somewhat openness to voting for the Conservatives with O’Toole as leader at 38.6 per cent in Ontario, 35.9 percent in British Columbia, 29 per cent in Atlantic Canada and 27.7 per cent in Quebec.

Those levels are roughly in line with the party’s vote share in last year’s election in B.C. and Atlantic Canada, but significantly higher than the party’s 2019 performance in Ontario and Quebec – suggesting a measure of support for O’Toole’s Conservatives in the crucial swing ridings in those two provinces.

Nationally, the Conservatives won 34.3 per cent of the popular vote in the 2019 federal election, ahead of the Liberals’ 33.1 per cent, but picked up 36 fewer seats due to their votes being heavily concentrated in Prairie and rural ridings.

These observations are based on an RDD dual frame (land- and cell-lines) hybrid telephone and online random survey of 1,039 Canadians, 18 years of age or older, between Aug. 31 and Sept. 3 as part of an omnibus survey. The margin of error for this survey is plus or minus three percentage points, 19 times out of 20.

This study was commissioned by CTV News and the research was conducted by Nanos Research.