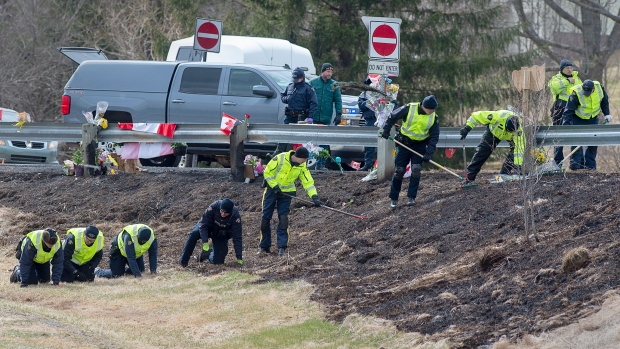 TORONTO — The shooter involved in a mass killing in Nova Scotia began his attack by handcuffing and assaulting his girlfriend before she escaped and hid in the surrounding woods, CTV News has learned.

Gabriel Wortman’sgirlfriend, who has not been identified, was badly beaten, but survived the assault and later informed officers of Wortman’s fake police cruiser, which the shooter used to evade police for several hours as his rampage continued through central Nova Scotia.

It was the shooter’s girlfriend who also provided officers with an image of the vehicle, which was shared on the Nova Scotia RCMP’s Twitter page.

Officers had previously said it was a witness who informed them of the vehicle, but did not specify who it was.

After his girlfriend’s escape on Saturday night, the 51-year-old denturist began burning the homes and shooting neighbours near his property in Portapique, N.S., in an apparent attempt to strike names off a hit list, according to a report in The Globe and Mail.

By the time he was shot dead by police Sunday morning – 100 kilometres away in Enfield, N.S. – he had killed 22 people.

The Globe reported on Thursday that a man who lives near the shooter’s property said he had been told by investigators that his name was “seventh or eighth” on a list that was found by police at the shooter’s home.

The reported discovery of the hit list provides one of what have thus far been very few clues into the shooter’s apparent goals and motivations. Police have said that he knew some of his victims, but not all of them. It is also believed that he was using illegally obtained weapons, as RCMP have said he did not have a valid licence to obtain or possess firearms in Canada.

The investigation into the killings is expected to take months. Military personnel and equipment have been brought in to help police sort through the evidence they discover at the 16 known crime scenes.

SHOOTER MAY HAVE BEEN PLANNING FOR YEARS

Pierre-Yves Bourduas, a former RCMP deputy commissioner, said Thursday that the existence of a hit list “makes a whole lot of sense” given the shooter seems to have planned out his rampage in detail.

CTV News has also learned that the shooter may have been planning his attack for at least two years, when he posed as a former Mountie and tried to buy an old police cruiser from a collector in New Brunswick.

The collector, who is now in his 80s, refused to sell it to him.

Public Safety Minister Bill Blair told reporters on Thursday he’s concerned that by dressing up as an RCMP officer and driving a fake police car the shooter violated the public’s trust in law enforcement to conduct the killings.

“People thought they were dealing with a trusted individual, (there’s) nobody more trusted in their communities than the local police and that he may have used that trust in order to victimize people,” he said.

On Thursday, audio recordings from first responders posted online showed how paramedics on the scene were aware by at least 11:20 p.m. on Saturday that there was an active shooter in the area, but were still unsure of many other details concerning the situation.

“There’s a person down there with a gun,” one paramedic said through two-way radio.

“They’re still looking for him. The patient we have got shot by him. He was just down there observing the fire, checking out the fire. So there could be other patients around the fire that could be gone already, but we’re not sure.”

The chaotic scene extended to a nearby fire hall that was being used to house evacuees of the shooting, where two RCMP officers opened fire on Sunday morning — when the shooter was not believed to be in that area at the time.

CTV News has learned the officers thought another RCMP officer was in fact the shooter and until stopped firing once the other officer identified himself.

A now-deleted Facebook post from The Onslow Belmont Fire Brigade said the gunshots damaged the fire hall, but no one was injured.

As police continue their own probe into the mass shooting, authorities are being dogged by questions about how the public was alerted to the unfolding rampage.

Pressed on the matter at a news conference on Wednesday, RCMP revealed that more than an hour elapsed between the time provincial emergency managers offered to help send an alert to every cell phone in the province and when the shooter was killed, rendering the offer moot.

During the hours-long rampage, RCMP limited their communications with the public to social media. These messages, which would never be seen by the many Nova Scotians who are not active on Facebook and Twitter, had their own delays.

When police learned that the shooter had a police uniform and a vehicle that appeared almost identical to an RCMP cruiser, it was more than two hours before that information was relayed to the public.

Nova Scotia RCMP has promised to provide a detailed timeline of events, but officers abruptly cancelled a news conference scheduled for Thursday evening.

Relatives of those killed in the rampage have blamed authorities for not doing more to alert the public to the imminent danger. Darcy Dobson, one of eight children of slain nurse Heather O’Brien, added her voice to that chorus on Thursday, saying an alert would have saved her mother’s life.

“I want to know why there wasn’t an emergency alert at [8 a.m.] when they knew that man had left Portapique, because that would have saved countless lives – not just my mother’s.”

Many Americans living in Nova Scotia received an additional alert, as the U.S. Consulate in Halifax emailed a warning about the shooter to all its registered U.S. citizens living in the province.

Meanwhile, the Nova Scotia RCMP Major Crime Unit has launched a tip line for any information related to the killings.

With files from CTV Atlantic and The Canadian Press