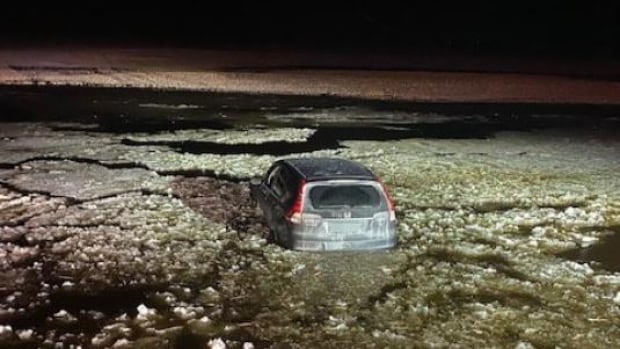 A woman facing hypothermia after crashing her SUV in a deep, water-filled ditch was rescued by a passing RCMP officer near Roblin, Man. last week.

The officer, who was in the right place at the right time, was driving on Highway 83 between Russell, Man. and Roblin during a snow storm when he saw the SUV in a ditch, according to a RCMP social media post from Thursday.

The Mountie was worried about people in the vehicle and decided to wade into the water to help.

He ended up carrying the driver of the SUV through the water to his police car to warm up until paramedics arrived to care for her.

The status of the driver isn’t known, but CBC News has reached out to the RCMP for more details.

Roblin is about 330 kilometres northwest of Winnipeg on the Manitoba-Saskatchewan border.