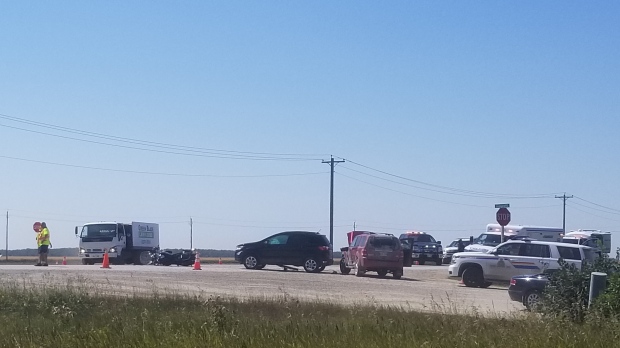 WINNIPEG — A crash involving a motorcycle and two other vehicles has shut down a section of McGillivray Boulevard, and left at least one person with a serious injury.

On Wednesday morning shortly after 11:40 a.m., the province reported that McGillivray Boulevard between Loudon Road and Road 8 E had been closed due to a collision.

A motorcycle was seen laying on its side, with two SUVs behind it – one with its hood up. Paramedics, along with firefighters and RCMP officers, were on the scene Wednesday afternoon.

RCMP told CTV News the crash happened around 11 a.m. As of Wednesday afternoon, RCMP said there is at least one person with a serious injury.

Westbound traffic along McGillivray Boulevard is being diverted north on Loudon Road.

– With files from CTV’s Daniel Timmerman