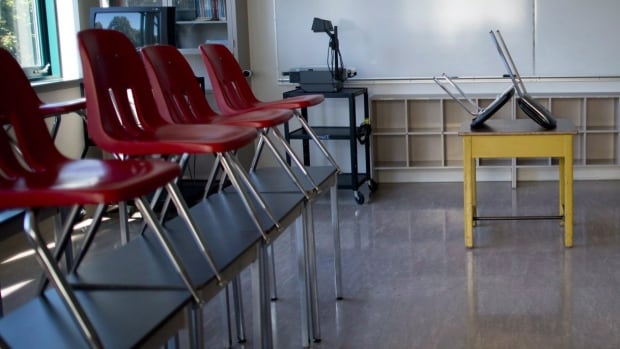 A Winnipeg mother and student-teacher is raising concerns as to why students are returning to school as university students resume courses online and Manitoba’s legislative assembly will not sit until October.

Alice McKay, a single parent of four, said she believes the return to school flies in the face of public health advice to physically distance and limit contact with others during COVID-19.

“It’s super stressful,” she said. “To me, it feels like our teachers and students are kind of being used as guinea pigs.”

Her household will be exposed to more than 100 people per day, as her children in Grade 3, 5, 7 and 8 each head back to the classroom in September and she begins her in-class teaching practicum, she said.

“Not just like, you know, passing them at the grocery store or something but into close contact,” she said. “And who knows how many people those hundred people came into contact with?”

A number of divisions released detailed plans of what a return to school will look like come Sept. 8 when classes resume.

Students in kindergarten to Grade 8 will return five days a week and learning will be conducted in cohorts, to limit contact with the larger student population. High school students will alternate days between online and in-class learning to reduce the number of students in class at one time.

Masks will be strongly recommended among students in Grade 5 to 12, but not mandatory.

Parents who don’t wish to send their children will have to register for home-schooling through the province instead.

McKay said the plan leaves parents without any option if they don’t feel comfortable sending their child back, unless they have the ability to home-school them.

It also leaves out answers to important questions, she said, including what happens in the event a student or teacher tests positive.

The Winnipeg School Division, where her children attend, said it plans to notify the school community if someone tests positive and encourage anyone in the same cohort to receive testing.

What’s not certain is whether the people in the classroom or cohort will be required to self-isolate.

Other divisions such as Seven Oaks said positive cases will be dealt with on a case by case basis.

Dr. Brent Roussin previously said in the event of a positive case, public health officials would conduct contact-tracing and identify staff or students who would be considered close contacts and required to isolate. A school closure would be a last resort, he said.

McKay’s biggest concern is the inability to maintain a safe distance from other students in the classroom.

“I don’t know how much space they think there is in a classroom.” she said. “I just don’t see it being possible.”

Her eldest children attend a junior high and high school with a student population alone of 1,300. She knows there will be fewer students, as the older students alternate days on site, but said with teachers, support staff, administration and cleaning staff it adds up.

She also wonders how the logistics of pick up and drop offs will work, as parents are encouraged to drive their children to school to reduce the number of kids’ on buses.

In fact, she is not sure how she is drop off and pick all four children at different schools and be at her practicum all with the same start and end time, she said.

In the past, her oldest children used public transit, something she is not comfortable continuing amid the pandemic.

McKay took her concerns to Twitter and the Manitoba government, tweeting Education Minister Kelvin Goertzen on his personal page Aug. 14.

She received no response.

“[I] was promptly blocked,” she said. “I don’t think I said anything offensive.”

McKay said she reached out to his personal page after seeing that his official government page states it’s run by his staff, not him personally.

She feels a return to school feels contradictory with the rising number of COVID-19 cases and a lack of options for parents to continue with remote learning.

“I’ve lost track of how many times Dr. Brent Roussin said you know, we’ve got to go back to the fundamentals,” she said. “But when we were doing those so-called fundamentals school was closed.”