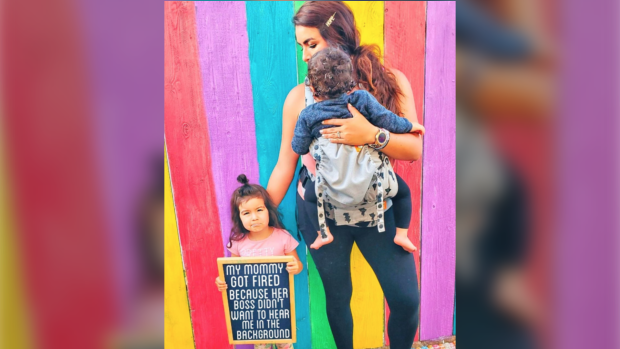 TORONTO — A California mother has filed a lawsuit against her former employer, alleging she was let go after being told repeatedly to keep her children quiet during work calls.

As COVID-19 restrictions began to set in, Drisana Rios says she and her colleagues were sent home with the support of her employer, leaving her to work remotely with a one-year-old and four-year-old and no childcare.

Rios says, at the beginning of her work from home stint, she informed her manager of her parenting responsibilities and they agreed that she could work her usual hours of 7:00 a.m. to 4:00 p.m., with an hour lunch at 11:30 a.m. to establish a routine for her kids.

At the end of her first week, Wallace alleges she received her first complaint.

“He said, ‘I don’t want to hear the kids on business calls, I don’t think its professional,’” she told CTVNews.ca by phone.

“That first week I reached out to human resources and let her know how stressed and overwhelmed I felt working from home and the unrealistic expectations and comments that I was receiving.”

After three months of what she describes as “constant harassment” and multiple complaints from her boss about her children, Wallace says she scheduled another call with her manager.

“That moment just felt awful. What kind of monster would respond that way?”

According to Rios’ lawyer, Daphne Delvaux, she was let go a week later.

“What makes this case a discrimination case is that the same things weren’t said to the fathers. Drisana was singled out because she has two kids and she’s a mother, and the same type of comments were not made to the men,” Delvaux told CTVNews.ca by phone, adding that Rios’ situation sheds light on why many women are scared to come forward about gender discrimination in the workplace.

“When you have a termination that follows so closely after reports of discrimination there’s a presumption that’s the reason.”

CTVNews.ca contacted the company regarding Rios’ case; however, a request for comment was not returned.

Delvaux said Rios’ did the right thing by approaching human resources with her complaints, adding that is a department that should protect employees who allege discrimination – especially in the midst of a pandemic.

“What’s really frustrating about this situation is it deters other women from speaking up,” she added.

“What we’re really trying to do with this case is show that there are repercussions for violating the law. All employers have to follow the rules.”

The post — which features her daughter holding a sign that reads, “My mommy got fired because her boss didn’t want to hear me in the background” — has garnered over 15,000 likes.

Rios says, though she remains unemployed in the midst of the pandemic, she has received overwhelming support from other mothers who are working from home while also home-schooling or caring for their kids.

“I’ve received so many messages from working mothers who are dealing with this. It’s not fair. I don’t want any mother to have to go through this ever again,” she said.

“As a working mother, I should be able to have a career, be a mom, and not be judged.”