Home  »  News   »   Most Canadians support testing everyone for COVID-19: poll 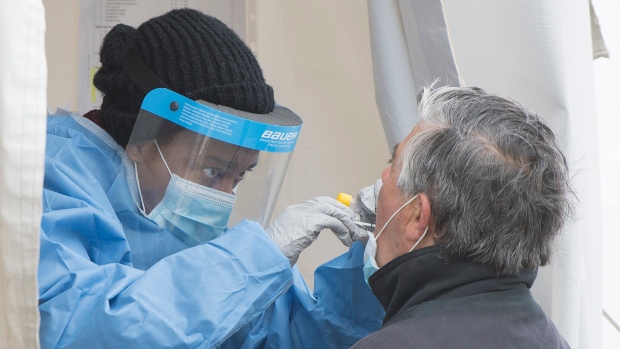 TORONTO — Experts say widespread testing for COVID-19 is one of the most effective defences against a second wave of infections, a measure most Canadians support according to a recent poll.

More than three in five Canadians say they are in favour of testing every Canadian for the novel coronavirus, according to a Nanos Research poll commissioned by CTV News.

The random survey of 1,009 Canadians, which took place between May 26 and 28, revealed that 28 per cent of respondents support and 33 per cent somewhat support widespread testing measures, while more than one in three opposed the idea.

Polling data shows that residents of Atlantic Canada and Ontario have a higher intensity of support for universal testing than residents in Western Canada.

As the COVID-19 pandemic continues, provinces are working to expand their testing criteria to include people with very mild or even abnormal COVID-19 symptoms, an effort Canada’s Chief Public Health Officer Dr. Theresa Tam says will help spot possible community cases that would otherwise go undetected.

Officials are also working to roll out the country’s first antibody test as rapidly as possible to help determine how much of the population may have been infected.

But some provinces, including Ontario and Quebec, have routinely fallen behind their diagnostic targets. The criteria for who can get tested also ranges widely between each province.

Nanos polling also shows that Canadians are more likely to say they are confident that there will be a vaccine available to fight COVID-19 within the next 12 months. However, four in ten respondents are not confident in that timeline.

Tam has noted that officials are working to understand how administering an eventual vaccine would be prioritized to certain segments of the population while considering “the maximum number of Canadians who may wish to be vaccinated.”

MOST CANADIANS HAPPY WITH PROVINCIAL RESPONSE

According to the poll, more than three in five Canadians are confident that their public health authorities have an accurate count of the number of COVID-19 cases in their province.

However, Ontario residents were less confident in the province’s data, with the majority of respondents doubting the official case count.

Ontario, one of the hardest hit provinces, has had several instances of reporting errors since the beginning of the outbreak.

On Thursday, the province recorded a spike in the number of deaths due to COVID-19 after days of relatively lower numbers. However, officials said the increase may have been due to a lag in reporting from local public health units. This comes just days after officials revealed nearly 500 COVID-19 patients were not flagged to local public health agencies for contact tracing due to a reporting error.

When it comes to the economic ramifications of the outbreak, nearly eight in ten Canadians say the opening up of the economy in their province is being done in a safe (33 per cent) or somewhat safe (46 per cent) way.

Residents in B.C. and Atlantic Canada were the most confident in the safety measures being taken to reopen the economy.

Twenty per cent of Canadians say the border should open to non-essential traffic once businesses are allowed to open, even if social distancing is still in place, with residents of the Prairies the most likely to be in favour of reopening.

Nanos conducted an RDD dual frame (land- and cell-lines) hybrid telephone and online random survey of 1,009 Canadians, 18 years of age or older, between May 26 and April 28, 2020. Participants were randomly recruited by telephone using live agents and administered a survey online.

The margin of error this survey is plus or minus 3.1 percentage points, 19 times out of 20.

The research was commissioned by CTV News and was conducted by Nanos Research.