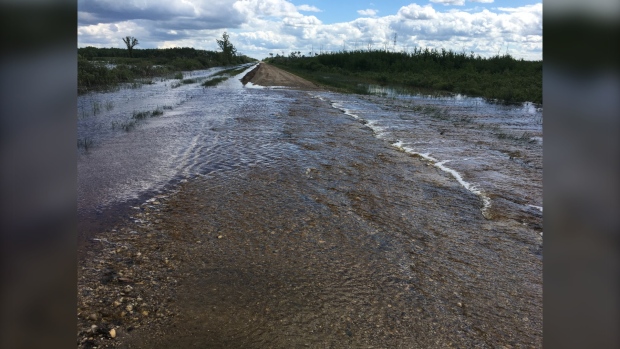 “All of our north-south roads are washed out,” said David Kiansky, reeve of the Rural Municipality of Stuartburn, a sprawling area of farms and small communities 90 kilometres southeast of Winnipeg with about 1,600 residents.

“We’ve got tube-diking going on … and we are going to try to save our town here.”

The region was hit with about 150 millimetres of rain in recent days. A handful of homes had water inside by Monday night.

As the rain continued through Tuesday and into Wednesday, water on the land washed over roadways and the Rat River rose. A bridge over the river was under threat and was likely to soon be out of commission, Kiansky said.

With road access to homes being cut off, the municipality decided to get people out of the hardest-hit areas while they could. More than 80 homes were vacated.

Evacuees who could not stay with family members were directed to hotels in nearby communities. The province brought in three trailers with tube dikes and other equipment, and had staff on site to look at options such as making cuts in roadways to drain water.

The Rural Municipality of Piney, to the east, also declared a state of emergency and was working to protect roads.

“Our efforts are focused on saving roads that are still passable at the moment. If a road is currently washed out, the R.M. has not prioritized these roads since our focus is on saving existing ones,” read a message posted on the municipality’s website.

The province will talk with municipal officials about financial assistance after the flood threat has subsided, Schuler said.

Kiansky said the one bit of good news was the weather forecast. It called for only a few showers followed by several days of sunshine.

“The sun is finally out, so maybe there’s light at the end of the tunnel.”

-This report by The Canadian Press was first published June 10, 2020