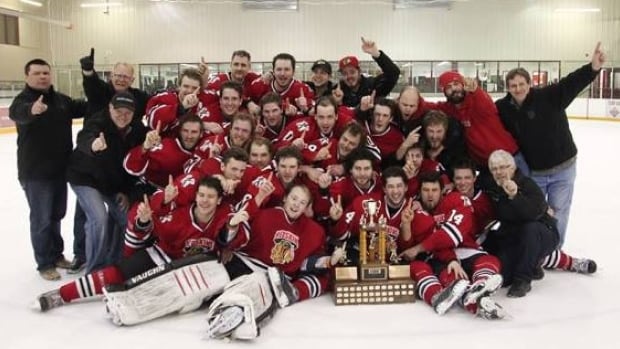 A senior hockey team in a small Manitoba city has changed its name following a push against the use of Indigenous names and caricatures as mascots.

The team in Morden, located about 100 kilometres southwest of Winnipeg, was previously named the Redskins, a derogatory term used to describe Indigenous people.

The team’s name on all social media platforms is now the Morden Bombers.

A statement from the team’s executive in August said the former name of the team was discussed with members of the organization and the community.

It said the history and pride ingrained in the organization would be carried forward with a new brand.

The move to change the name came soon after Washington’s National Football League team committed to changing the same name in July.

That same month, Edmonton’s Canadian Football League team decided to change its name from the Eskimos. And the Manitoba junior men’s hockey team in Neepawa announced it was dropping its name, the Natives, as well as its Indigenous mascot.

The Morden team’s logo was also a stereotypical Indigenous man with four feathers in his hair, a replica of the controversial logo of the National Hockey League’s Chicago Blackhawks. While it hasn’t changed on social media with the new Bombers name, it has been indicated the logo may still change as part of the team’s rebranding effort.

“To us, our logo has always represented community, camaraderie, commitment and perseverance. These are the values we have defended when challenged,” the team’s statement said in August.

It added that not all members of the community found the team’s name inclusive or appropriate and that the team has a better understanding of how the name and logo can be perceived.

“We wish to represent every citizen of Morden and made the decision to make changes moving forward,” the statement said.

Morden’s senior hockey team chose the previous name about 25 years ago. A motion to city council to change the name in 2015 failed.

Mayor Brandon Burley wrote a letter to the South Eastern Manitoba Hockey League team’s leadership over the summer requesting the name and logo be changed.

“We have a good number of Indigenous folks in our community,” he said at the time. “The time has come and gone when we can continue to offend them with something as simple as a hockey team name.”

The mayor said he would support any associated costs through fundraising efforts and his own personal finances.

Earlier this month, the team tweeted out information about raffle tickets saying a costly rebranding process was underway.