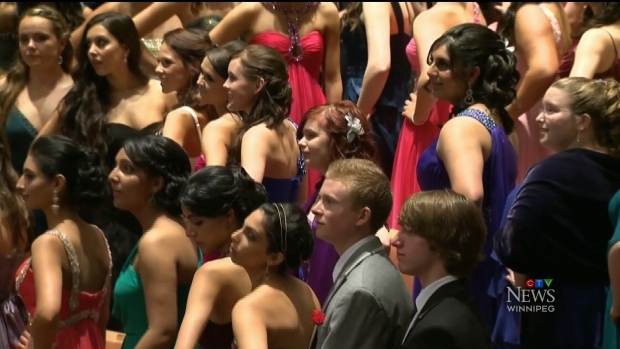 WINNIPEG — The COVID-19 crisis arrived just as the class of 2020 was getting ready to leave high school behind.

Grade 12 students across Manitoba are expected to miss graduation ceremonies this June, after the province shut the door on reopening schools.

“There is no big ending,” said 17-year-old Dominique Mendoza.

The Kelvin High School student says the end of the year feels unfinished.

“I’ve always had this expectation growing up, grade 12 is supposed to be your final year to show what you’ve accomplished.”

“It’s hard to know you waited your entire life to walk across that stage and it’s not happening,” Harms said.

“We do not want to risk a rebound effect… We’d be very concerned, I think, about moving back to a congregation that would lead to a COVID case,” said Pallister.

Harms and Mendoza understand the need to avoid celebrations during the pandemic, but say they can’t help but feel let down.

“I got my dress in December,” said Harms. “I know some people that got their dresses in August.”

The cancelled celebrations are also having an effect on local businesses that sell suits and gowns.

“There are a lot of people that wait until later in the year… so that’s definitely hurt a little bit. We’re going to have a lot of stock in the fall,” said Stella’s Bridal Shop manager Deedee Hunt.

Some students have floated the idea of a virtual graduation or holding a more casual ceremony.

“I think it would be so much fun to put on a dress and Facetime a couple of my friends and have a little laugh and get dressed up and feel accomplished,” said Mendoza.

While the pandemic has disrupted their educations and plans for the future, the two students at Kelvin High school say they are trying to stay optimistic.

“This is a unique time to embrace and understand the safety precautions in place… for the greater good,” said Mendoza.

“You kind of have to look at the positives and see why we’re doing this,” said Harms.