Home  »  News   »   “Might as well jump right in”: Manitobans return to malls and restaurants on reopening day 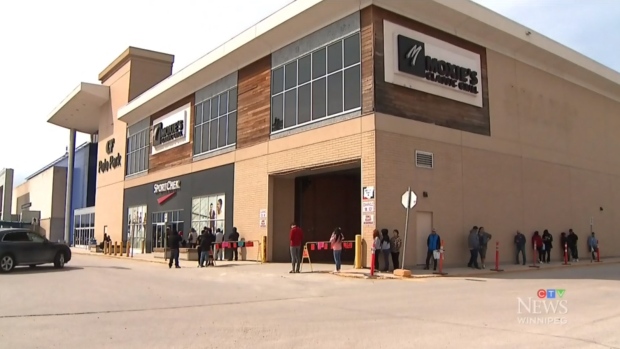 WINNIPEG — After a two month lockdown that transformed daily life and crippled businesses, Manitoba has begun to slowly reopen. On Monday, the province started easing some of the restrictions put in place to protect against COVID-19.

“We’re just curious,” said Orlando Capistrano, who arrived at Polo Park mall to shop. Retail stores, hair salons and restaurant patios are some of the businesses included in the first phase of the province’s reopening plan.

While the mall may be open, not all stores have unlocked their doors.

“It was quiet inside,” said Capistrano. “Most of the stores are closed.”

Roughly 30 of the near 200 stores in Polo Park opened Monday.

“Obviously not every store was able to comply with the provincial regulations to be able to reopen,” said Polo Park general manager Peter Havens. “Once they get more of their PPE and protections, a lot more stores will open throughout the rest of the week.”

As shoppers streamed into the mall, there were constant reminders to keep their distance, like signs and markers on the floor.

“We’re using the rules of the road,” said Havens. “Stay to the right, passing lanes on the left and parking lane is on the right.”

Restaurants with patios are also navigating the changes. People began trickling into Pony Corral on Pembina, which has opened its patio.

“It’s really a good feeling, after being cooped up,” said customer Wayne Hardy. “It weighs on you.”

Owner Peter Ginakes said he has mixed feelings about reopening.

Under the guidelines, restaurants patios must operate at 50 per cent capacity and no more than ten people can be seated at one table.

Ginakes said he would have liked the option to seat people inside the restaurant because the weather is unpredictable.

“I was kind of hoping we could reopen the way we closed. We could have a small amount of people in our restaurants… If it rains in the middle of the patio, and you’re asking people to come into work, we’re creating more labour and we have to send them home.”

A spokesperson for the province said there are no plans to step up enforcement of public health orders.

“Enforcement activities related to Operation SAFE-APART will continue, as it was prior to the reopening,” they said. “Operations are subject to change in accordance with public health orders.”

“Might as well jump right in and enjoy it while it lasts because we could be back in lockdown anytime.”