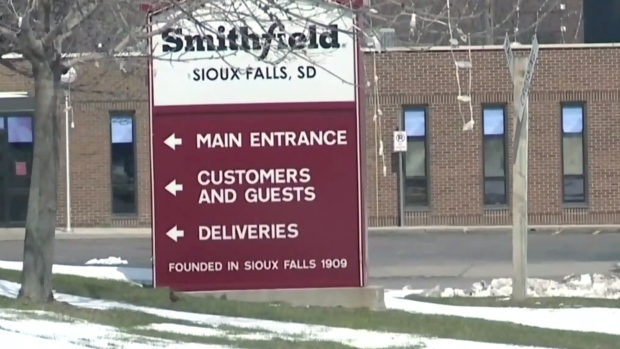 WINNIPEG — Some North American meat processing plants are getting hit hard by COVID-19 and some Manitoba producers say they’re already starting to feel the effects.

Certain facilities have had to temporarily close or scale back production due to the spread of the coronavirus.

In Sioux Falls, SD, COVID-19 brought production to a halt at one of the largest pork processing plants on the continent.

The Smithfield Foods facility has been closed until further notice after several employees tested positive for COVID-19.

Rick Bergmann, a hog producer in the Steinbach, Man. area and chair of the Canadian Pork Council, said producers in this province are already feeling the impact of the shut down.

“It’s a major concern and we see it in the marketplace right now on the valuation of animals because of that problem,” said Bergmann.

In addition to lower prices, he said it means some producers could be stuck with hogs they can’t send for slaughter, noting producers can’t simply slow down production.

“If you can’t ship them or move them, you’d better find a solution because there’s more that are coming so that’s the challenge right now,” he said.

Tyler Fulton, the director of risk management with Hams Marketing Services, said most Manitoba hogs are processed within the province, but he said some farmers will still feel the impact.

“The size of that plant represents about four per cent of the U.S. slaughter,” said Fulton. “When you’ve got a plant of that size that goes down and goes dark and is not operating that means all that product needs to be routed elsewhere.”

The biggest effect, he said, will be on what Manitoba producers are paid.

“When a big plant in the U.S. goes down, what that means is the supply is of hogs is burdensome, it probably exceeds the capacity to actually process the animals which makes the value of those hogs lower,” he said. “When the U.S. price is lower, the price in Canada as it works into the formula, is also lower.”

“It could impact the ability for producers here to market their animals if this were to stretch out any further,” said Callum. “We’re definitely working with industry stakeholders and government to try to ensure that the supply of beef keeps moving and these markets keep moving in these difficult times.

Sylvain Charlebois, a professor in food distribution and policy at Dalhousie University, said processing plant closures are concerning but likely won’t have a major impact on meat supplies.

“In terms of access to food I’m not overly concerned yet because inventories are quite high for most of these products,” said Charlebois. “It can be disruptive, but it’s not disastrous.

“With cattle I’m less concerned because the production cycle is much longer, but with pork and chicken, in particular, a shut down is problematic just because when an animal is ready for harvest, it has to be harvested as soon as possible.”

Charlebois said retail pork and beef prices have been increasing since the start of the pandemic but are expected to level off, eventually.

“Farm gate prices are depressed but retail prices are still going up, which is interesting,” he said. “Because of this situation we are expecting prices not to drop anytime soon.”

Bergmann said pork producers are in talks with the federal government to deal with the situation.

“We’re producing protein and sustenance for the world,” said Bergmann. “We need to ensure that keeps going.”