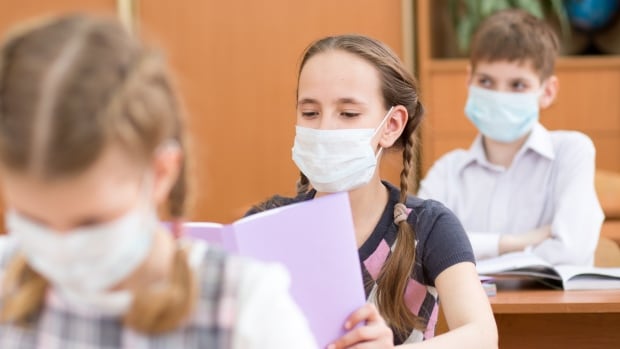 Masks will be mandatory in Manitoba schools for students from grades 4 to 12 when they can’t physically distance, Premier Brian Pallister announced Wednesday.

“Out of an abundance of caution, and having listened with great interest to the input of literally thousands and thousands of Manitobans, we will be requiring mandatory use of masks in schools in grades 4 to 12, where physical distancing of two metres is not possible,” Pallister said at a news conference.

“This would, of course, include staff in those schools, not just students.”

The government had previously strongly recommended use of masks in common spaces by students in Grade 5 and up, but had stopped short of requiring them except on buses.

“Mask usage has already been strongly recommended. In our family, when the doctor made those recommendations, they were always followed,” Pallister said.

“But we want to be clear that when these doctor’s recommendations are implemented in our school system, they will be followed.”

The mandate comes after pressure from some parents and the Manitoba Teachers’ Society.

“I need school to be as safe as it could possibly be so my family can be safe,” teachers union president James Bedford said Tuesday.

But people with breathing problems, children under age two and those who can’t take a mask off by themselves shouldn’t wear them, he said.