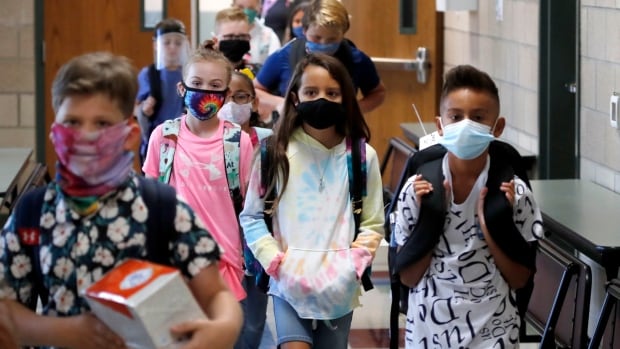 Masks will be mandatory in Manitoba schools for students from grades 4 to 12 when they can’t physically distance, provincial officials said Wednesday, after pressure from parents and teachers with fears about safety come September.

“I don’t think there’s probably been a bigger issue — or a bigger emotional issue — that we’ve had to deal with yet than the return to school,” said Dr. Brent Roussin, Manitoba’s chief public health officer.

“Parents are anxious about returning their kids to school.”

Mask use also will be mandatory for school staff, wherever students or staff can’t be sure of maintaining two metres of physical distancing, Roussin and Manitoba Premier Brian Pallister announced Wednesday.

The province has previously resisted mandating mask use in its back-to-school plan. The plan announced last week strongly recommended mask use in common spaces for students in Grade 5 and up, but stopped short of requiring them except on buses.

But parents and educators have raised concerns in recent days and some called for a mandatory order.

“What we’ve heard from administrators, school leaders, parents, teachers as well, is that it would be even more straightforward to simply say it’s required. And it might ease, in terms of oversight, supervision of the children,” Pallister said Wednesday.

“We hear these points, and we think within the school system where social distancing is not possible, that this will make good sense.”

“They want what we want … the safety of our children and of staff,” he said. “But they all know the importance of our kids getting back to in-class learning.”

It’s still not clear how schools are to enforce mask use or who will be exempt from the rule.

Roussin said last week that people with breathing problems, children under age two and those who can’t take a mask off by themselves shouldn’t wear them.

“This is an issue. When we mandate things, we have to start thinking about exceptions,” he said Wednesday.

The province will provide a list of exemptions, he said, and is working with divisions on a plan for enforcement.

Public Health is looking at ways to make mask use easier on students, Roussin said Wednesday, such as building in “mask breaks” during the school day.

Masks won’t be needed in areas where students can be sure to maintain a physical distance of two metres between each other. Some classrooms, for example, may have desks spaced far enough apart that students could take their masks off while learning.

“It’s possible, if that distancing can be maintained, then a mask really isn’t required,” Roussin said.

The province hasn’t ruled out requiring mask use in other public spaces beyond schools, Roussin said.

“It’s certainly on the table. We’ve increased our messaging on masks over time. Right now we’re clearly saying that indoor public places, especially when you can’t physically distance, we want Manitobans to wear that mask,” he said.

“If you’re not sure, if you’re out at a retail outlet or a store where you can’t be adequately positive you’re going to be physically distancing, be wearing a mask.”