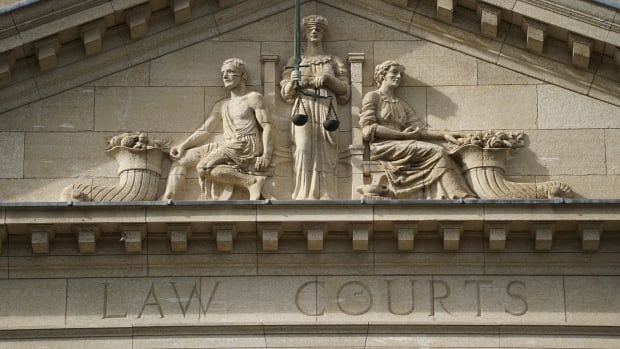 Masks are mandatory in Winnipeg’s Law Courts complex starting Tuesday after an employee tested positive for COVID-19 on Monday.

The staff member was last in the office on Wednesday and did not interact with the public, according to a letter signed by the heads of all three levels of court in the province.

This person and their close contacts are in isolation.

“The Law Courts complex has undergone additional enhanced cleaning, including all high touch points areas like elevator buttons, courtrooms, etc.,” said the letter signed by Richard Chartier, the chief justice of Manitoba; Glenn Joyal, the chief justice of the Court of Queen’s Bench; and Margaret Wiebe, the chief provincial judge.

If there is any risk to the public, additional information will be provided, a provincial spokesperson said.

In addition to other preventative measures, members of the public, including counsel and the media, must wear a mask at all times while inside the courthouse, including in the provincial court office in St. Boniface.

There are some exceptions, though.

People who work in offices in the courthouse or in the chambers area can choose whether they want to wear a mask within those spaces but they’re encouraged to. Outside of those spaces, like in public areas and hallways, they must wear a mask

According to the letter, it will be up to the presiding judge to decide if and when people in courtrooms should be masked.

Clerks who work at public desks will have to wear a mask unless they’re working behind plexiglass.

This is a welcome move for Gerri Wiebe, the president of the Criminal Defence Lawyers Association of Manitoba.

“I absolutely think masks are an appropriate step to be taken,” she said in an interview on Monday night.

“I’m glad to see them taking a step up because I think that this makes things safer for the people that are working in the courthouse every day.”

Wiebe said masks are already required in the Winnipeg Remand Centre, where she sometimes goes to meet with clients, and most lawyers already have masks on hand in case they’re in a space where physical distancing isn’t possible.

“I think most or many were wearing them already in the halls of the courthouse, so I don’t know if it’ll be a big change for most of us.”

Last month, the three levels of courts announced masks must be worn in court facilities in the Prairie Mountain Health region.

That’s because the region is under the orange restricted level on the province’s colour-coded pandemic response system.