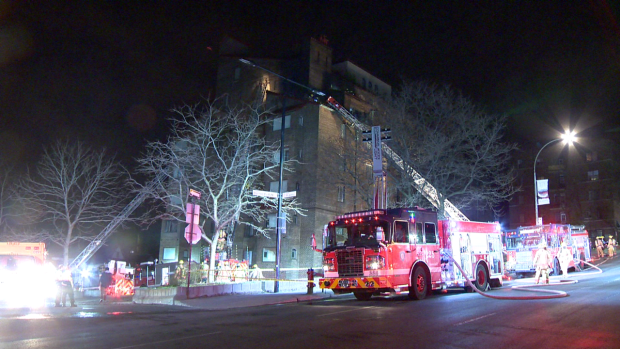 MONTREAL — Prime Minister Justin Trudeau’s mother, Margaret Trudeau, was taken to hospital late Monday night after being exposed to a fire that started on the terrace of her apartment building in Montreal, sources tell CTV News.

Paramedics who were on the scene said they received a call about a woman in her 70s who had suffered smoke inhalation and possibly burns. They confirmed on Tuesday that her life is not in danger.

About 70 firefighters were called to the scene on Doctor Penfield Avenue, near the Atwater Avenue intersection around 11:25 p.m.

The Montreal fire department says the fire seems to have started on the terrace on the fifth floor of the building and preliminary information suggests it was contained to one apartment unit.

Three other families were also evacuated from the buiding and are being looked after by Red Cross.

Firefighters were on the scene for about four hours late Monday night into Tuesday until 3:30 a.m. They will try to determine the cause of the fire throughout the day on Tuesday.

Building fire has dozens of people run from their apartment’s in the middle of the night. Firefighter raced to the intersection of Atwater and Dr Penfield Avenue in Montreal. One person sent to hospital. Crews says please avoid the area. @CTVMontreal pic.twitter.com/iyerZFiEP4

Trudeau is an author and a mental health advocate, and the former wife of the late Pierre Elliott Trudeau.

In mid March, she was self-isolating after spending time with Sophie Grégoire-Trudeau, who had tested positive for the COVID-19 virus upon returning from a trip to England.

“I was with Sophie, Justin’s wife, over in London, in the UK, doing a big speaking event, and we were together,” she said at the time. “I had lots of contact with Sophie, as we all did. There’s 17 of us in self-isolation in our family now.”

Trudeau said isolation is hard and unnatural for humans, but it’s what needs to be done to keep everyone safe through the pandemic — particularly seniors who are more at risk.

“We are vulnerable, and if you want us to stay alive, it’s got to be a team effort. Grandma can’t be kissed and held the way she usually is,” she said. “Make sure the children use hand sanitizer.”