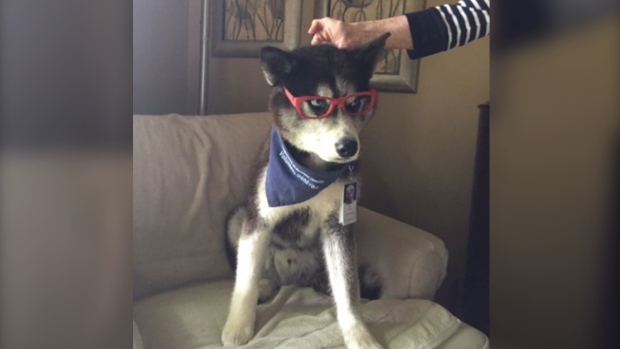 After the loss of beloved therapy dog Rusty, famed for wearing glasses and leaving people with ear-to-ear grins, Winnipeg hospitals will soon see his replacement.

After years of service at St. Boniface Hospital, Rusty, the therapy dog, died of cancer in February at the age of 17, kicking off the tough search for the right dog to pass on his important duties to.

Hero, a four-year-old Siberian husky, will be stepping up to take over Rusty’s old duties.

According to the Facebook post, the dog gets its name because it was born on Remembrance Day 2015.

Hero is described as uniquely quiet and calm for the breed.

The announcement post also details how Hero got the job.

Ames apparently made a Kijiji post, which was seen by a small-time breeder from Selkirk.

The breeder decided to keep Hero for herself and not to sell him because his temperament was so special.

When the breeder saw the Kijiji post, she decided to give the dog to Ames so that Hero could bring joy to many other people.

Hero is currently in training for his therapy dog certification.