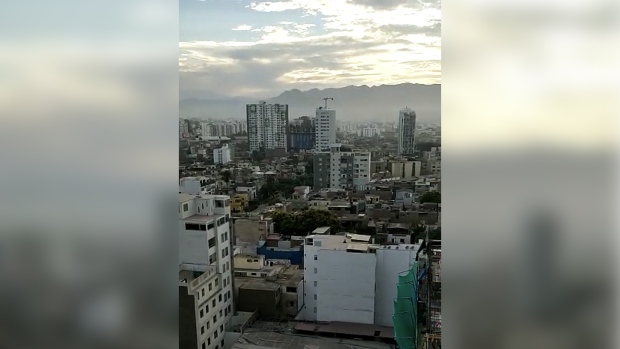 WINNIPEG — Help is on the way for Manitobans stranded in Peru after the country closed its borders due to COVID-19.

Some Canadians waiting for those flights, including St. Leon, Man. residents Lorraine and Allen Grenier, are now wondering whether there’ll be enough room for everyone who wants to leave.

“That is a concern,” said Lorraine in an interview from her hotel room in Lima, Peru. “And then we’re left to see if and what comes in the next wave.”

“The main issue we have right now is what happens to those who can’t get a seat.”

MORE THAN 2,000 CANADIANS BELIEVED TO BE TRYING TO LEAVE

Numbers weren’t immediately available from the federal government on how many Canadians have registered for the flights from Peru, but the Greniers as well as other travellers have heard around 2,600 Canadians are trying to leave.

The Greniers left for Peru on March 5 after verifying there were no travel advisories and seeing zero cases of coronavirus in the country. They were in Cusco after returning from some hiking tours when they found out the borders would be closing.

They managed to get a flight to Lima, but that’s as far as they got.

“It went from the best trip of our lives to the most chaotic moments of our lives,” said Lorraine. “That whole announcement of, ‘you have 12 hours to leave, the borders will close’ just didn’t give us enough time to leave.”

“The longer we wait, the more challenges or obstacles that are coming up that we have to work around.”

The Greniers are travelling with another couple from Manitoba. The group has hunkered down in a hotel, physically distancing themselves from others and leaving only to visit the Canadian Embassy and get groceries from nearby stores.

“We’re trying to eat very well and we’re trying to walk to the embassy two or three times a day, which the police is allowing, but it’s very monitored here. To keep wellness in the mind and wellness physically is first and foremost.”

Brown, a doctor now working in Toronto, has been vacationing with her partner for the past month. They scrambled to try to leave the country earlier, but Brown said no flights were available including one they had booked.

HOPING FOR A SEAT ON PROMISED FLIGHTS HOME

Like the Greniers, Brown is hoping to get home soon on one of the three flights promised by the federal government.

“It was sort of sad and scary at the beginning,” Brown said in an interview from her Airbnb in Lima. “We were not sure how to get out at all, but once we became aware that they were at least trying, that helped, but it’s slow and there’s tons of Canadians here.”

Brown has started working remotely to help her patients. For her, getting home is the only first step. Once Brown arrives back in Canada she’ll have to self-isolate for 14 days before returning to work if she stays healthy, to help deal with COVID-19.

Just before 7 p.m. Manitoba time on Monday, Jodie Brown said she was able to secure tickets for one of the three flights promised by the government.