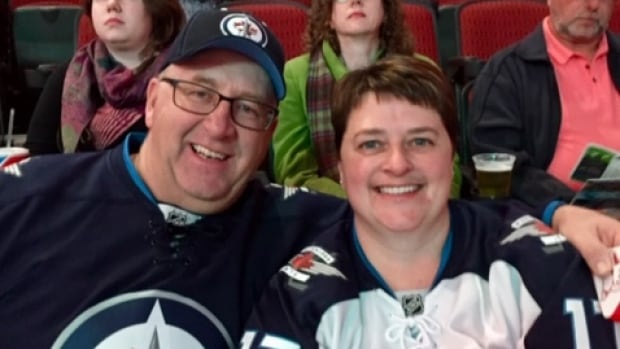 A Manitoba woman with COVID-19 is warning others to take even mild symptoms seriously, after she woke up with a headache the day after participating in a golf tournament and then tested positive.

Cathy Thiessen had no symptoms at all during the Aug. 9 tournament in Cartwright, Man., about 180 kilometres south of Winnipeg, she said in a phone interview Monday.

But the following day, Thiessen had a headache and felt exhausted. Her husband had some cold symptoms, so first thing the next morning, out of an abundance of caution, they drove from their home in Mather, Man., to go get tested in Brandon.

On Thursday, around 4 p.m., they got a call from Public Health, letting them know they’d tested positive.

“I can’t say the word that I actually said,” Thiessen said of the moment she learned she had COVID-19, and her instant worry about the golf tournament.

“It really made my heart sink that I may have just infected a lot of people not knowing that I had this.… It wasn’t a good feeling.”

Those calls, and the fear of infecting others, were worse than any of her physical symptoms, Thiessen said. She’s urging all Manitobans to take mild symptoms seriously, get tested and stay home when sick.

“The hardest, hardest thing for me was having to contact people and say, ‘I have tested positive, I’m sorry. I was near you or worked with you or beside you,'” she said.

“If I can keep somebody else from having to go through that, that would be wonderful.”

Dr. Brent Roussin, Manitoba’s chief public health officer, warned the public on Friday there was a risk of exposure to COVID-19 at the Cartwright Town and Country Golf Club on Aug. 9, the day of the tournament.

The risk of transmission is considered low, but anyone who was there should seek testing if symptoms develop.

Roussin has recently urged Manitobans not to seek testing if they don’t have symptoms of COVID-19. However, if you develop symptoms, even mild ones, you should seek testing and otherwise stay home.

On Monday, Thiessen’s symptoms had subsided and she feels physically fine, but the emotional toll of worrying she may have made someone else sick continues to weigh on her mind.

“I have been feeling really good. I wouldn’t know that I have COVID, had I not have tested positive,” she said.

“I just really am scared [about] if I have passed it on to somebody and they struggle with it, and have trouble getting over it.… That’s my biggest fear.”

She still has no idea how she got sick, she said. She’s always careful to sanitize when she’s out in public and hasn’t been in contact with anyone who has COVID-19, as far as she knows.

That uncertainty, too, has made her experience with the illness harder.

“A lot of people, thankfully, have either phoned with questions or texted us, and a lot of them have asked, ‘Do you have any idea where you got it from?'” she said.

“It would be easier if I could say, you know, I was here, and so-and-so might have had it…. That’s been hard, not having answers for people.”

She’s thankful she and her husband got tested when they did, despite how mild their symptoms were, so they had the opportunity to self-isolate and prevent further spread.

“The biggest thing is, if you just feel a little bit iffy or have any concerns, try to stay away from people if you can help it,” she said.

“Just be aware of where you are, who you’re with.”