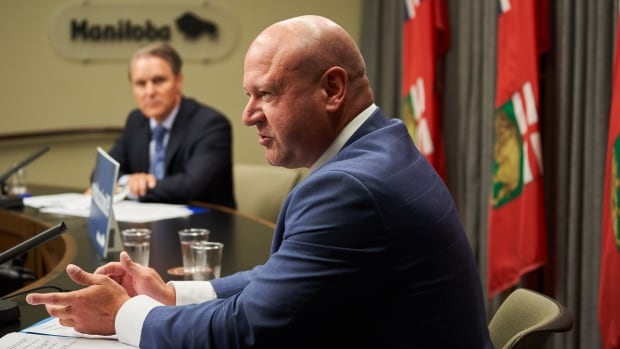 Dr. Brent Roussin, Manitoba’s chief public health officer, and Health Minister Cameron Friesen will give the latest details on the novel coronavirus in the province on Thursday afternoon.

The school became the first in Manitoba to be moved to the restricted, or orange, level under the province’s colour-coded pandemic response system.

Fisher River Cree Nation announced on Wednesday it is suspending in-class learning until 2021 because of concerns about the spread of COVID-19 in the Interlake community.

That announcement came after someone on the First Nation tested positive for the illness last week.

There were 11 cases of COVID-19 linked to schools in Manitoba in the week since students returned to class on Sept. 8, Education Minister Kelvin Goertzen said at a news conference on Wednesday.

The first of those was announced on the second day of school, when a student at Churchill High School was diagnosed with the illness.

Meanwhile, health officials are working to expand COVID-19 testing capacity in Winnipeg after many sites in the city experienced long lines in recent days.