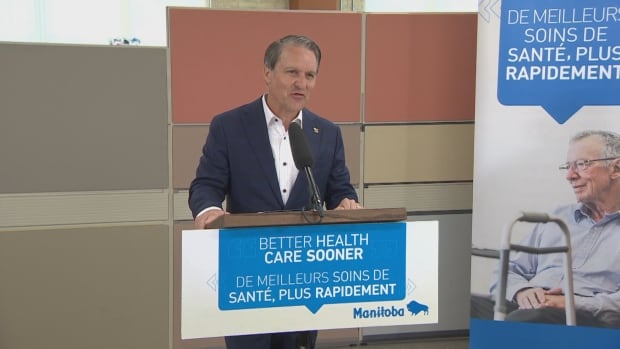 The province of Manitoba is spending $2.1 million to help three Manitoba non-profits develop 70 housing units for people who have completed addictions recovery programs.

“In Manitoba there’s a lot of good people doing good work when it comes to addictions and meeting people at a point of tremendous need,” Health Minister Cameron Friesen announced at a press conference on Wednesday.

But he said the work is often “conducted in silos and it is disconnected from other good work going on.”

The funding announced Wednesday is intended “to better co-ordinate that good work that’s going on and to ensure that people who are trying to move to wellness, who are courageously seeking help, don’t fall through the cracks,” he said.

With money for one-time capital costs and operating funding from the province, Siloam Mission will develop 20 units, Riverwood Church Community will develop 40 units at Riverwood House in Elmwood and Tamarack Recovery will develop 10 units.

These organizations will also provide ongoing support for the tenants by helping them fulfil their post-treatment plans, including finding work or going back to school.

Currently, there are only seven organizations providing supportive long-term programs in Manitoba to approximately 174 people every year, but Friesen says demand has increased and about 1,000 people are seeking this type of housing.

“They need access to stable housing and … a safe place to live, to put them back on a path to a healthy lifestyle.”

Jim Bell, the CEO of Siloam Mission, said these units are “much needed in our community,” and that the organization plans to build 20 units in its old office space at 300 Princess St.

“We look forward together to be able encourage hope, to speed recovery, and to support people as they transition back into community and start to fulfil their greatest potential,” he said at the press conference.

Advocates have long called for more long-term addictions treatment availability in the province.

“We’re trying to … ensure that gaps do not exist between acute and longer-term addictions treatment,” Friesen said.

In a news release, the province said it received recommendations from its illicit drug task force and from outside consultants that identified the need for supportive recovery housing.

That type of housing been identified as an effective option for people in need of an alcohol and drug-free place to stay, and improves success rates for addictions treatment, the province said.

Friesen said all units are expected to be running by the end of March next year.