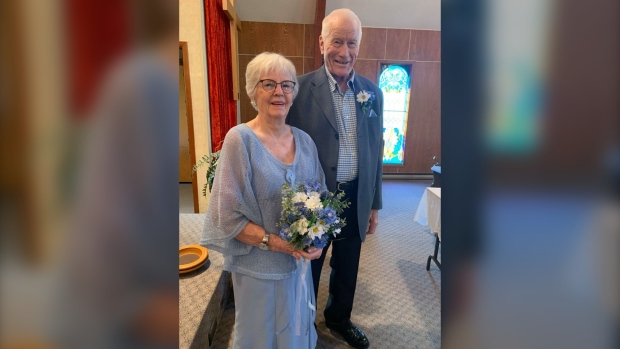 WINNIPEG — Technology helped bridge the gap for a Manitoba family to attend a wedding due to physical distancing rules.

Jaycee McLaren’s grandfather Roy McLaren, who is 95 years old, tied the knot Thursday with his girlfriend Barb Linaker, who is 88 years old, at a church in Pilot Mound, Man.

Jaycee says the couple have been dating for the last two years.

“They called my parents over one night, and told them that they’d like to get married, so they could live with each other,” she said. “They said they wanted to do it for their next stage of life.”

It’s, the second marriage for Roy and Barb, who both lost their spouses. The couple had been dating since 2018.

But, the family was concerned about holding the wedding, due to physical distancing requirements as a result of the COVID-19 pandemic.

Barb’s daughter said Jaycee helped handle the issue. She set up meetings over Zoom, a video conferencing app, to allow family who wanted to attend to watch the wedding, while keeping their distance.

Jaycee added Roy and Barb thought the experience was cool.

The only people in attendance physically at the wedding, besides the couple, were Jaycee’s parents to act as witnesses, and the minister performing the service. The wedding took place in the Crystal City church in Pilot Mound.

Since the wedding, the newlyweds have moved in together for self-isolation, with family and friends calling to check in on them.

“They don’t leave the house in Pilot Mound,” she said. “They can get groceries delivered right to their door, so it’s that great small-town living as well.”